Did I fall asleep? Dollhouse embroidery

I'm trying to get my embroidery stitches neater, so I practised on these teeny 5cm wide hoops. It is harder to be neat on black material as well, so I'm pretty pleased.

On another note, do you think every woman Fran Kranz has ever been with woke up the next morning and said "did I fall alseep?" I know I would.

Finally, here, have a clip of some amusing Topher moments, (inexplicably played against a background of 80s sitcom music) 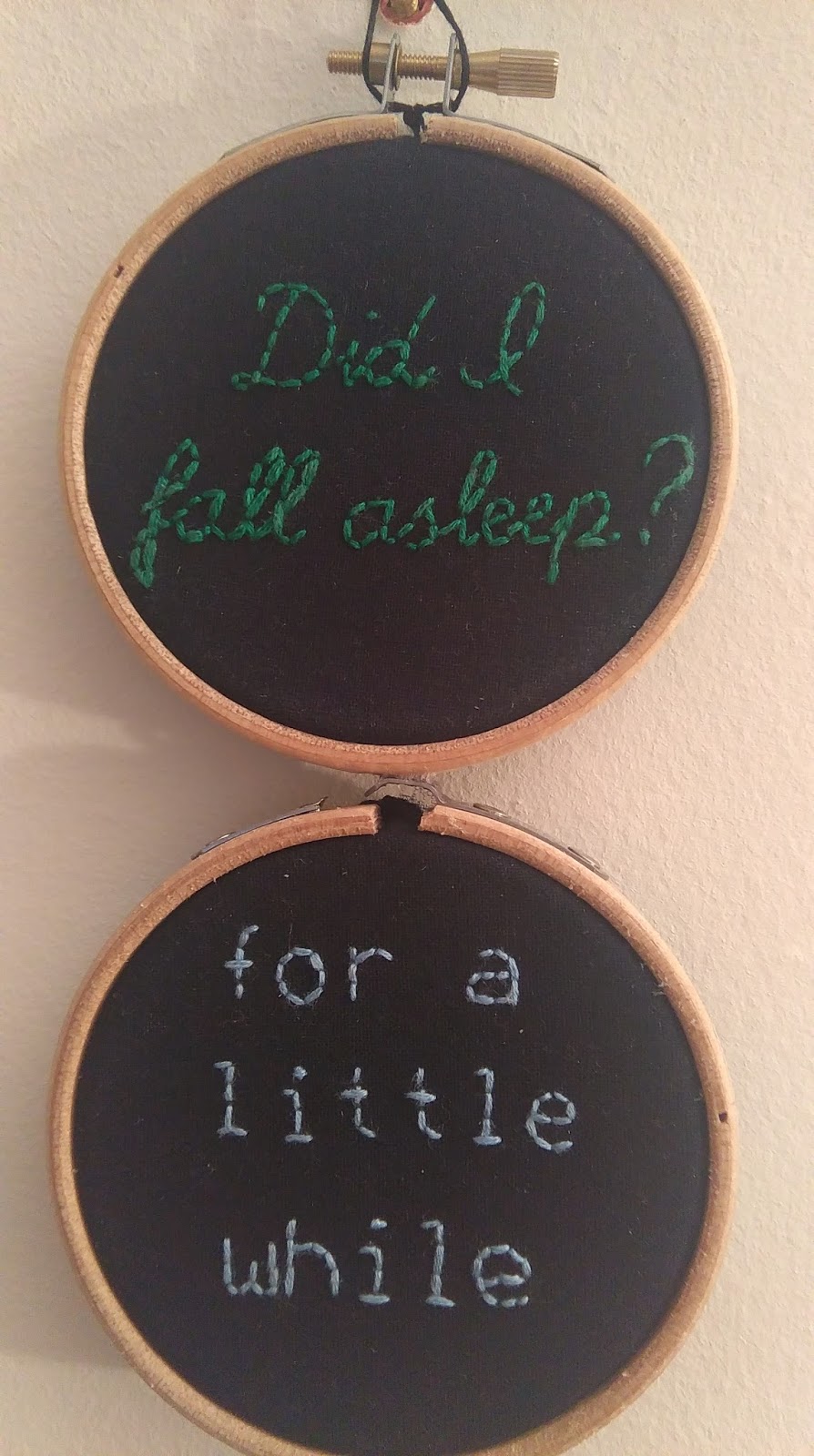 Posted by minipoppy at 5:52 PM No comments:

A couple of pig songs


I stumbled across these in my email archive the other day and I thought I'd put them here so that I don't lose them (because that would be a *disaster*).
Urm, so if you aren't aware of the marvellous thing that was the pig song mailing list ... I have no explanation, other than to say a crazy man rewrote songs using pig related lyrics in an attempt to get people to drink beer. I guest spotted a couple of times. Half of the fun was working out what songs they were, although these two are pretty obvious.

Porcine Wizard
Ever since I was a piglet
I’ve wished that I could fly
Ain’t got no wings or feathers
But I just got to try
Cos I’m so fat and tasty
If I don’t leave this sty
That mean, hungry farmer
Sure gonna make me fry

I try to look less meaty
But dieting’s so tough
When yummy rotten veggies
Are filling up your trough
Can’t stop while there’s still food there
A pig is what I am.
If I don’t start to fly soon
Sure gonna end as ham.

I figured out the secret
From birds and moths and bees
And earlier this morning
I flew above the trees
The wind between my bristles
Makes me feel so free
This fat flying piggy
Ain’t gonna end as tea.

I nearly got
A long way away
But as I flew
I heard a magpie say:
“How do you think he does it?
We all know
Pigs aren’t meant to fly.”

The knowledge of this statement
That piggies shouldn’t fly
I found it so upsetting
I tumbled out the sky
A bumpy crash land proving
I shouldn’t fly at all.
That fat, bouncy farmer
Sure breaks a mean pig’s fall.

Piggy In The Sty With Piglets
Piggies in blankets with hams all aquiver
There’s salt in the bacon and love in the sties
Apple sauce loving and truffle-breathed kisses
A sow stares with glazed piggy eyes
Flower-carved radishes strewn in the hay
Half eaten brussels are crushed
Look for the pig with the love in her eyes
And she grunts.

Silence returns once more over the farmyard
With trembling snout, the sow softly sighs
Dreaming of marriage and having his piglets
She smiles at the star-studded skies

Piglets are born the sow looks at her children
Dreams of their futures, all grown up and wise
Then comes the farmer, duplicitous, smiling
His tea tonight; six small pork pies.

[Refrain repeated. Fades]
Posted by minipoppy at 10:32 AM No comments:

I'm learning how to make Waldorf dolls - this one was a first attempt so he is not perfect. But look at the little nosey! 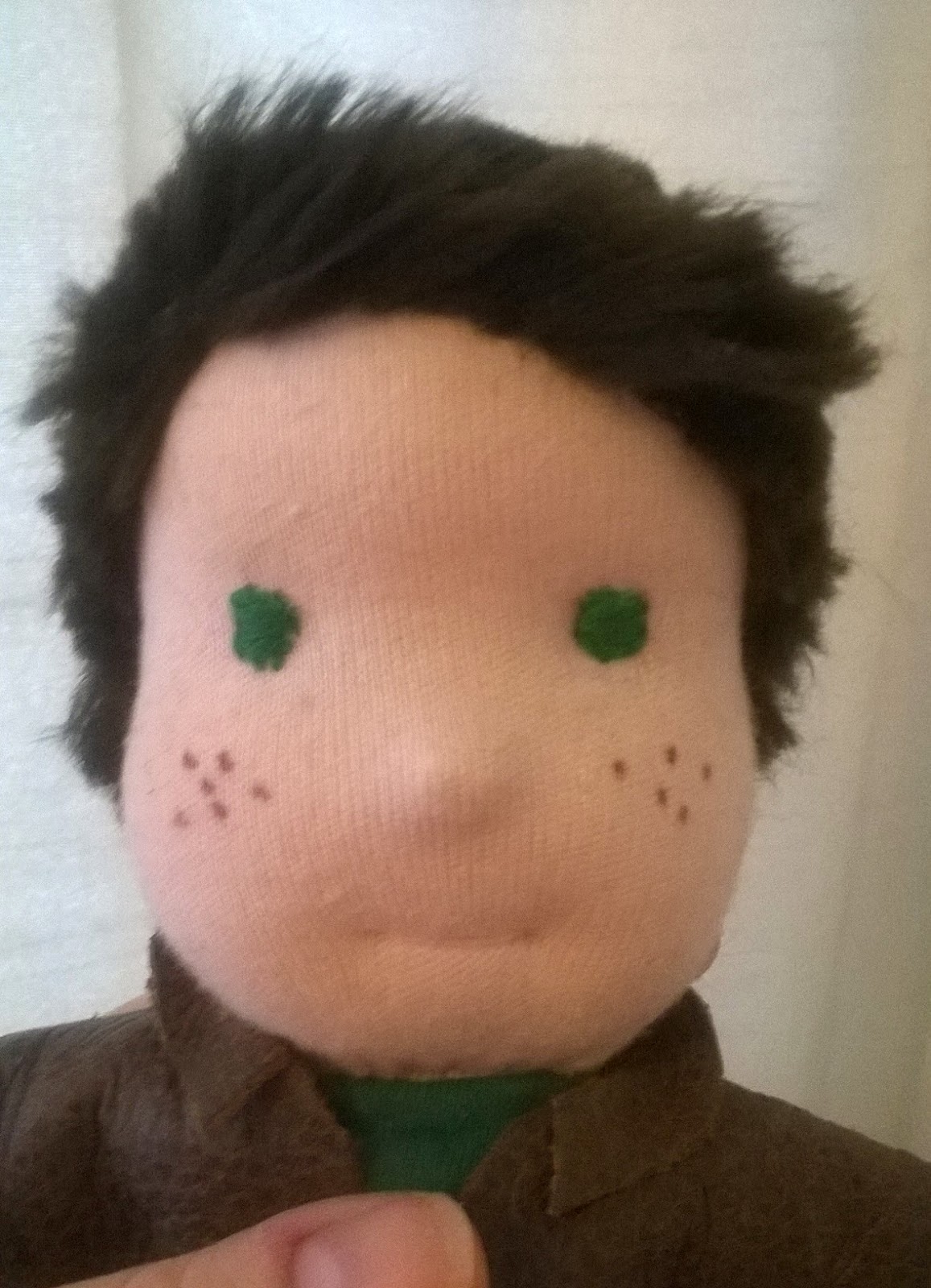 There's some wrinkles in the neck that won't be there in the next attempt. 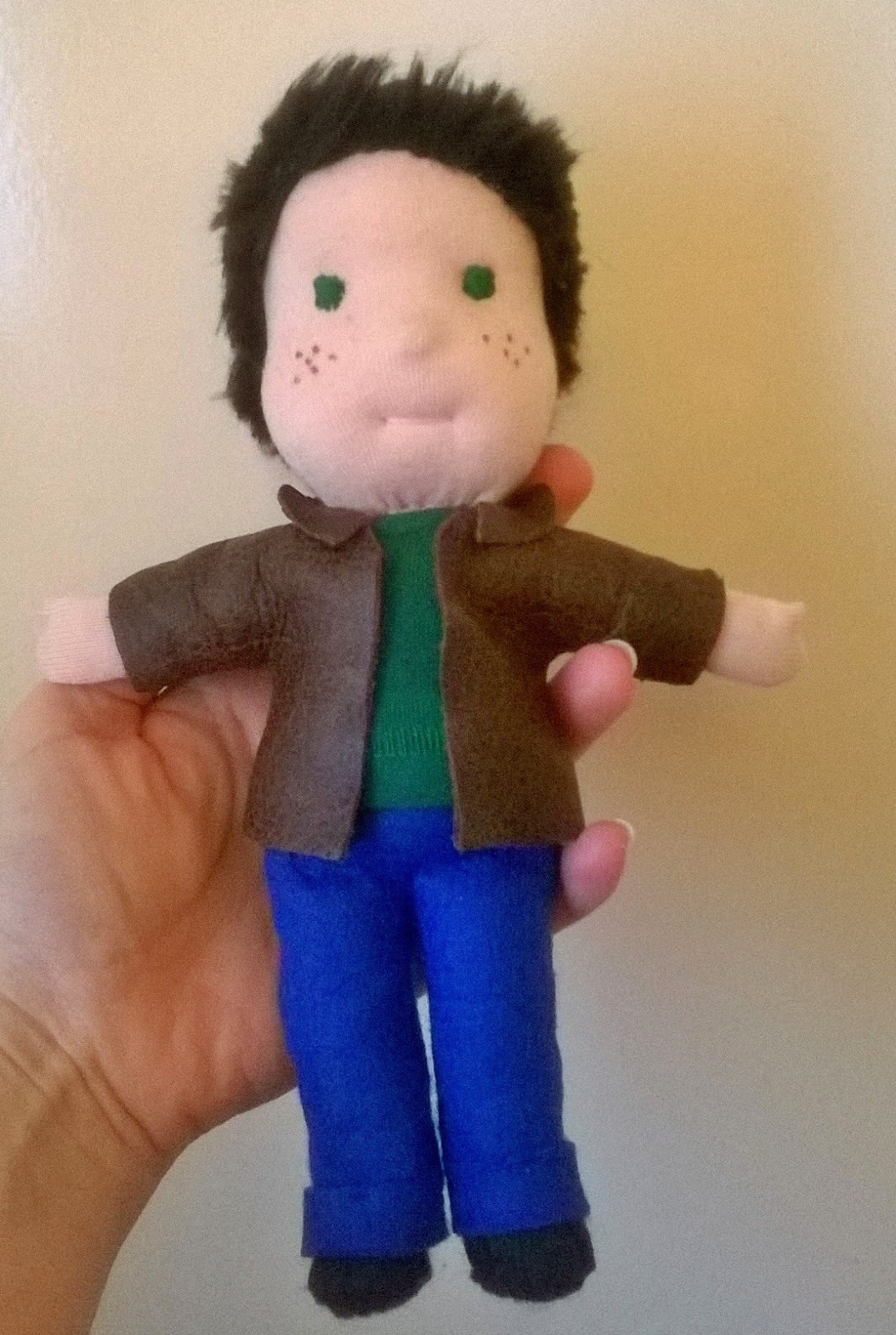 He is called Dean. I really must stop making Dean Winchester dolls... 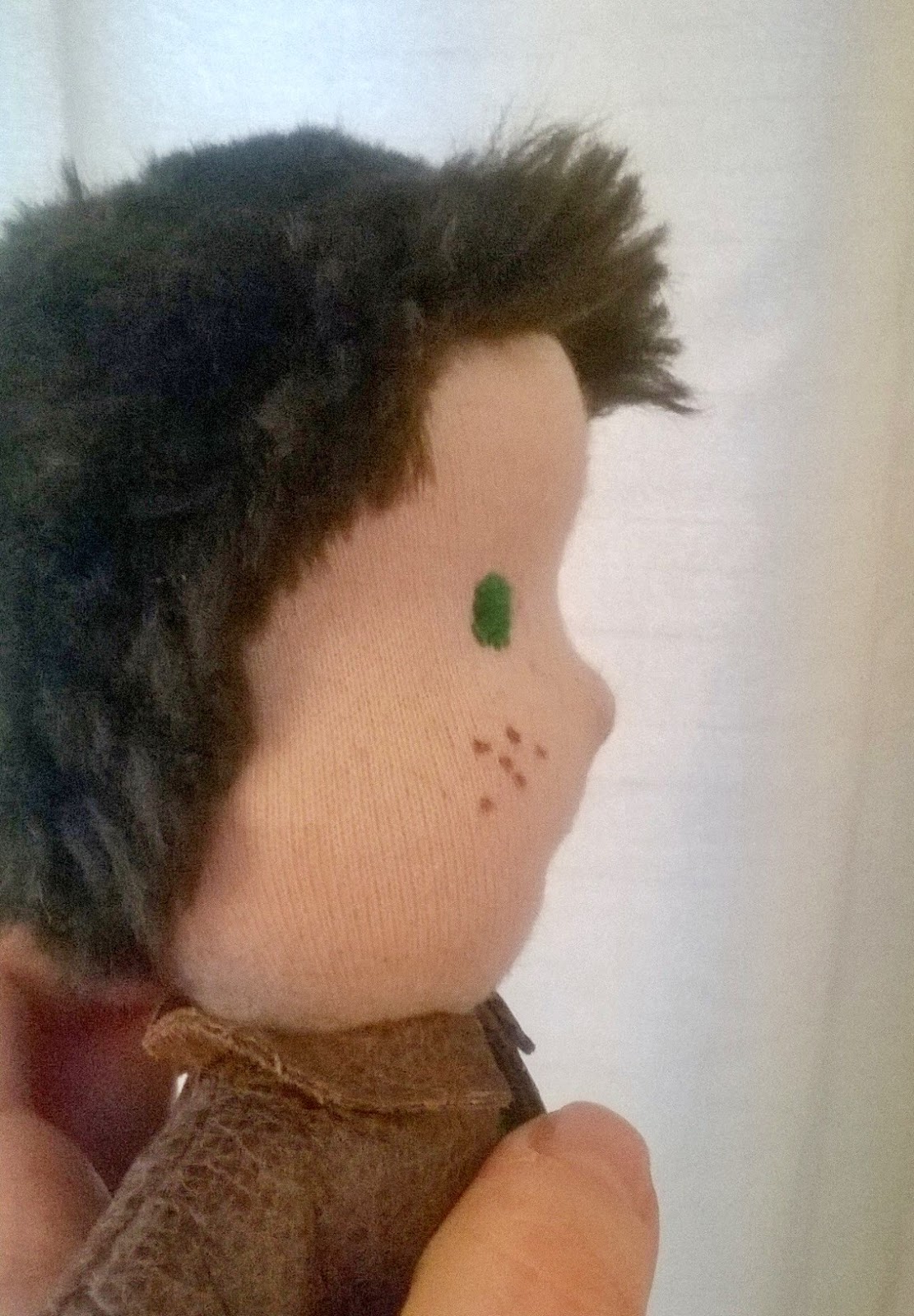 Posted by minipoppy at 8:07 PM No comments:

Heading up the list of things I make that no one has ever heard of, here's my Silver Tom doll. Silver Tom is a Bard in a web series called Journey Quest. It is really good! There is Carrow, a cleric who has his God turn from him after he is turned into an undead thing ("there's zombies which are bodies with no souls, ghosts which are souls with no bodies, but what you have managed to create is a soul in an undead, rotting body. Well done.") There's a Rincewind-esque wizard who gets stuck with a talking sword, an orc with an identity crisis, oh and there's the world's most miserable gargoyle. And then, of course, there are the songsmiths. They are the chroniclers of all quests and adventures but much like presenters of nature programs they have to sneak around without affecting the outcome by so much as talking to the protagonists. Silver Tom is trying to poach a great epic from Wren, a journeyman who dresses like a drunken pixie
Here he is with his cape on. 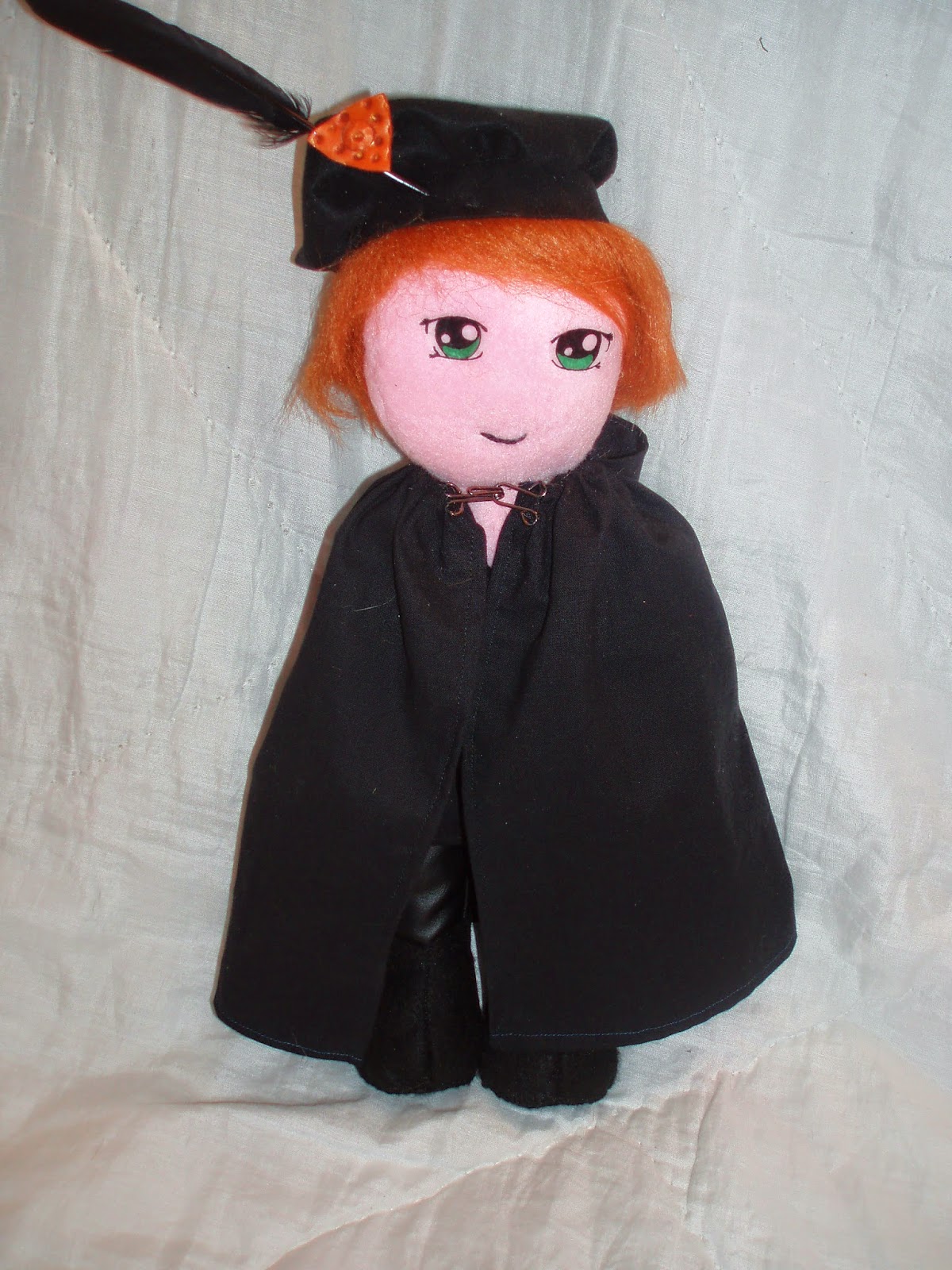 There's more after the break

Read more »
Posted by minipoppy at 8:29 PM No comments: