It is Tolkein Reading day apparently. Presumably because 25th March is the day that Sauron was crippled, thus the long reign of terror of the second Dark Lord finally came to its end.
So, in my slightly snotty state, I thought I'd knock up a little Gollum. Sorry, feeling too tired to write anything clever this evening.
Posted by minipoppy at 8:13 PM No comments:

I found an immense amount of black fleece in the back of my airing cupboard which, though I obviously bought for a reason, said reason has since been lost to the mists of time.
And I still needed to do something with that second pillow that I mentioned a while back, the sister to the wampa cushion. 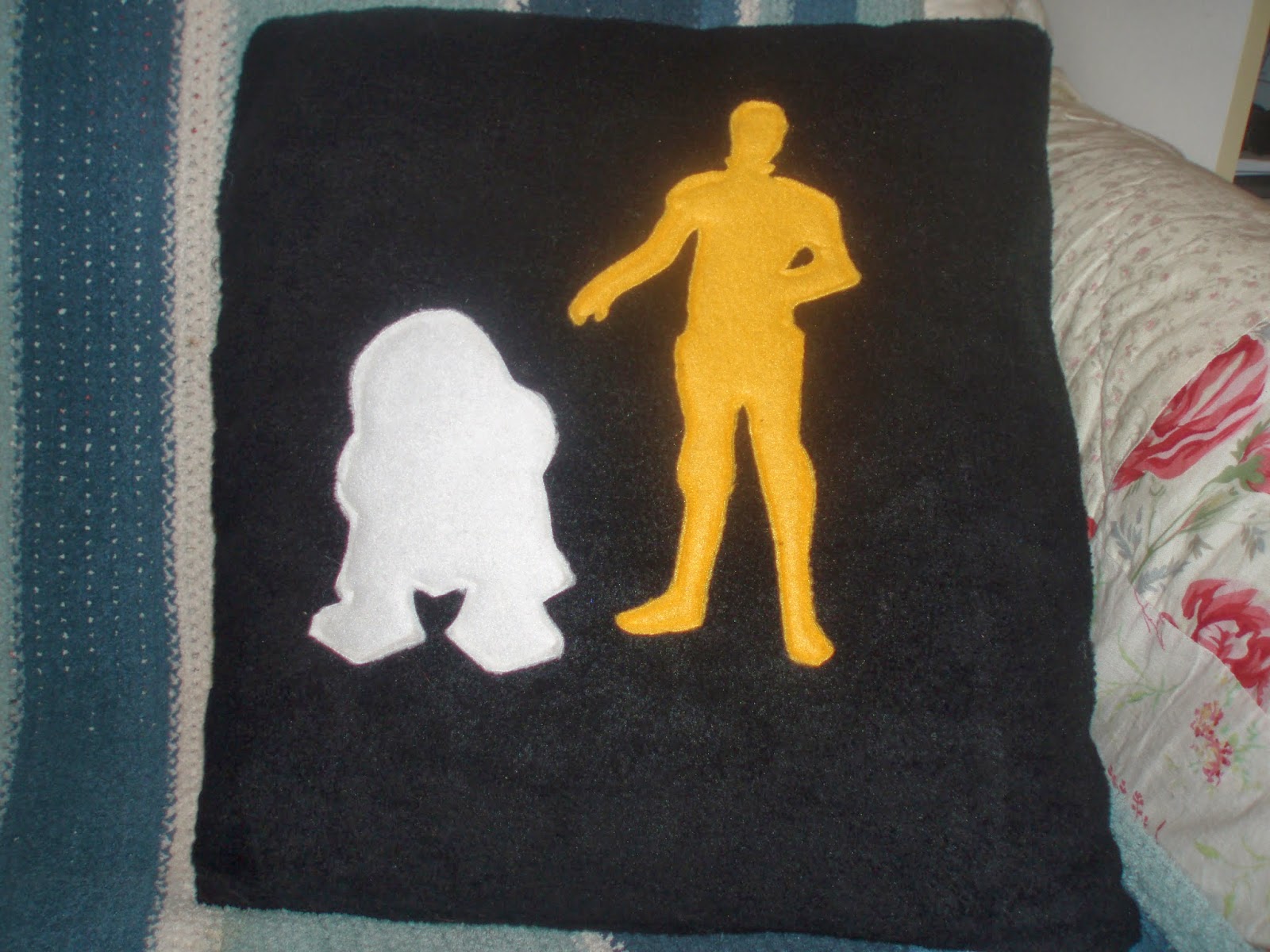 Not the cushions you are looking for. It is currently raining so cuddling up on that sofa with the minky soft fleece and fluffy pillows and watching Star Wars seems like an eminently sensible plan for the afternoon. 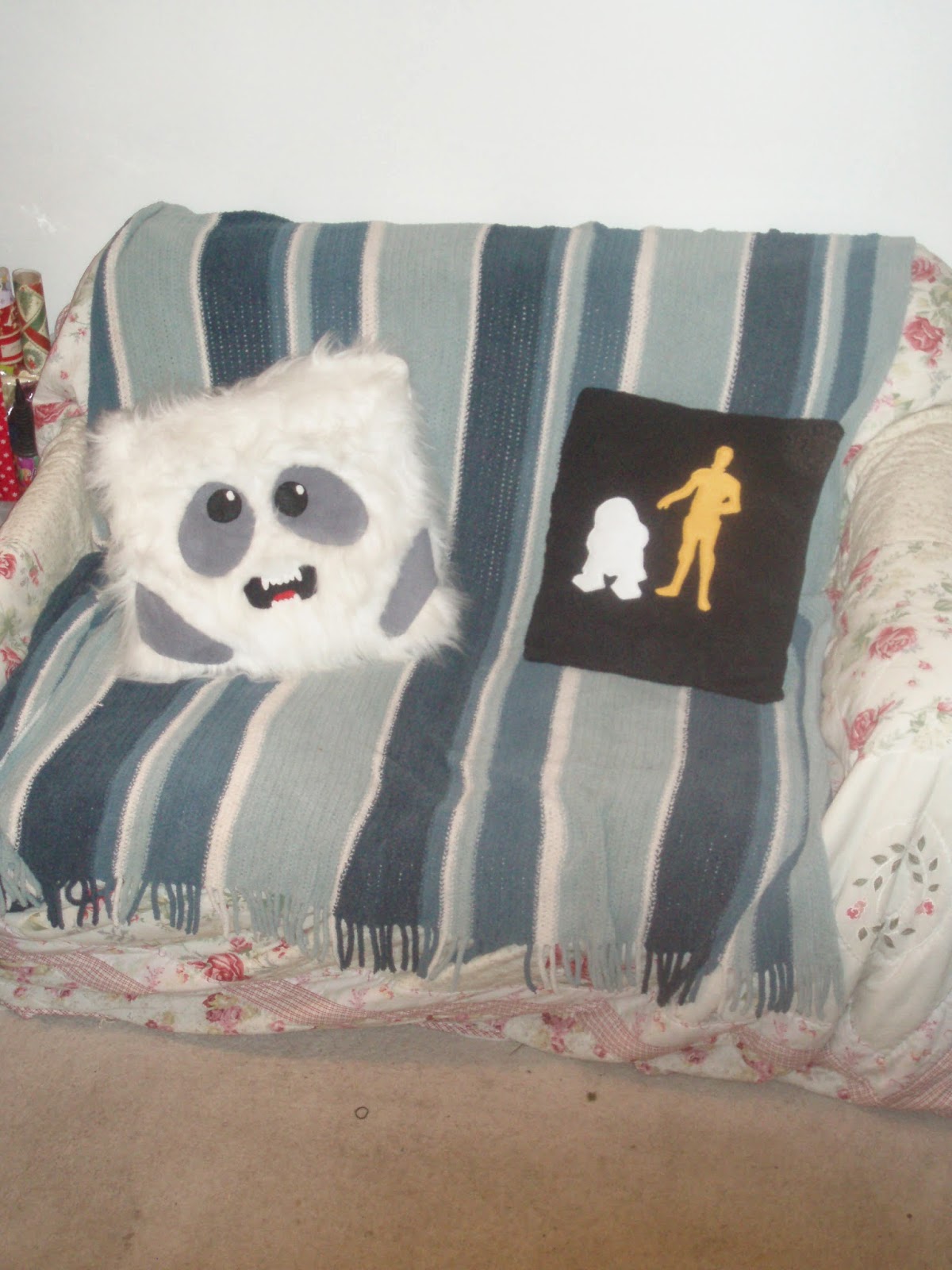 Plus, here is a bonus picture - quidditch cupcakes for Sports Relief. Not that I have read Harry Potter, it just seemed the thing to do.

The snitches are made of ferrero rocher (I peeled all the chocolate off. AND ATE IT!) sprayed with gold lustre and the wings from rice paper, also sprayed gold - although it isn't too obvious in this picture. 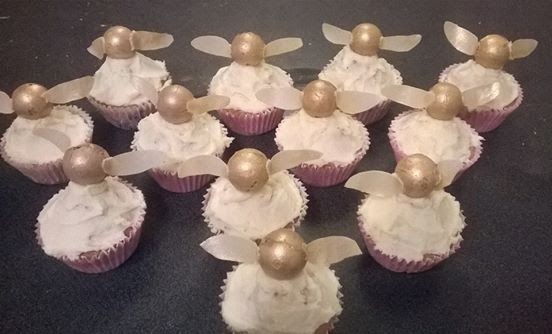 Posted by minipoppy at 8:46 AM No comments:

Despicable Me and Toy Story shoes

My dad has a Despicable Me hat that I made him and my mum now has shoes.  I am going to make the two of them walk around together with a minion at either end so I can have a jolly good giggle. 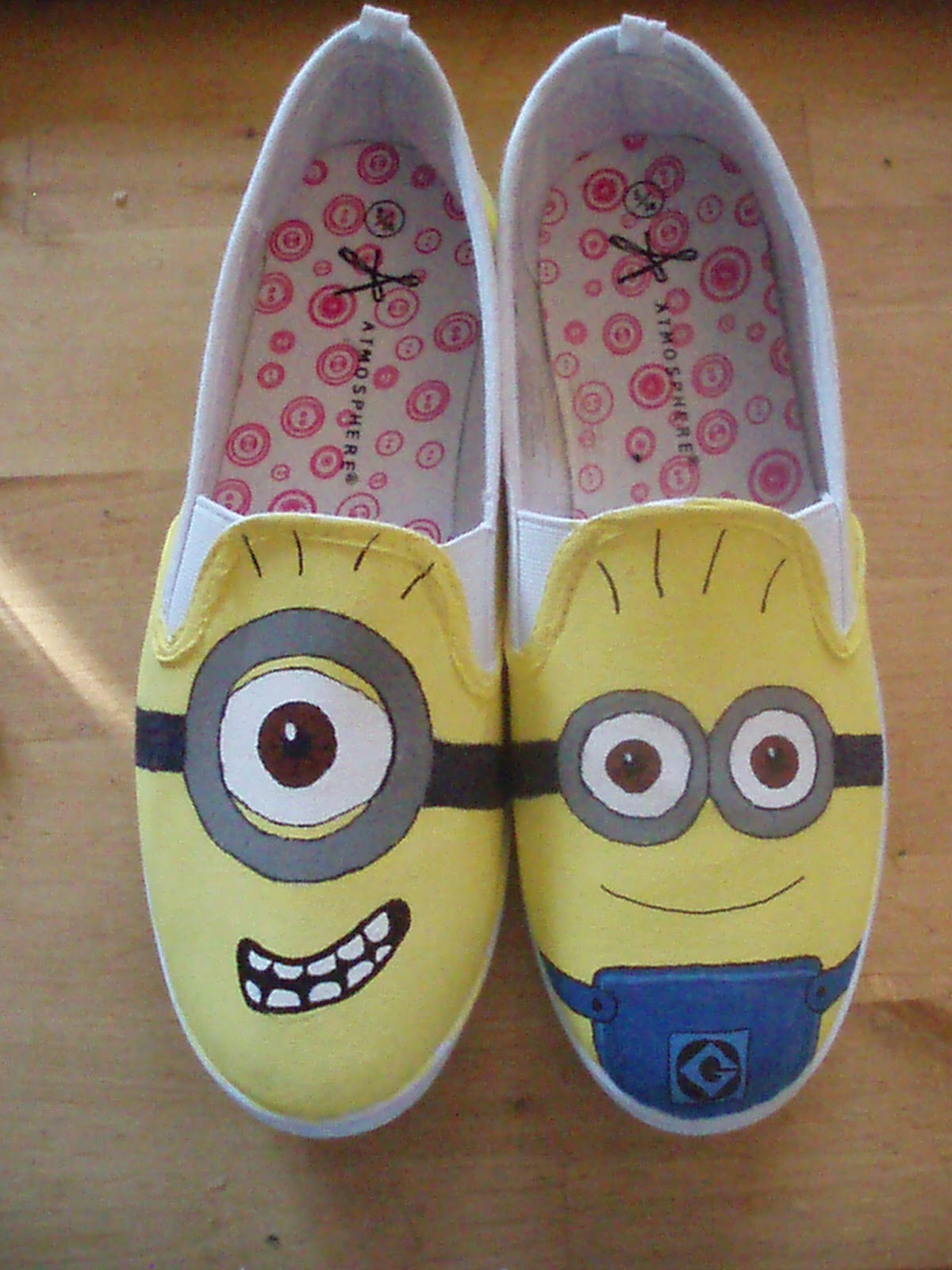 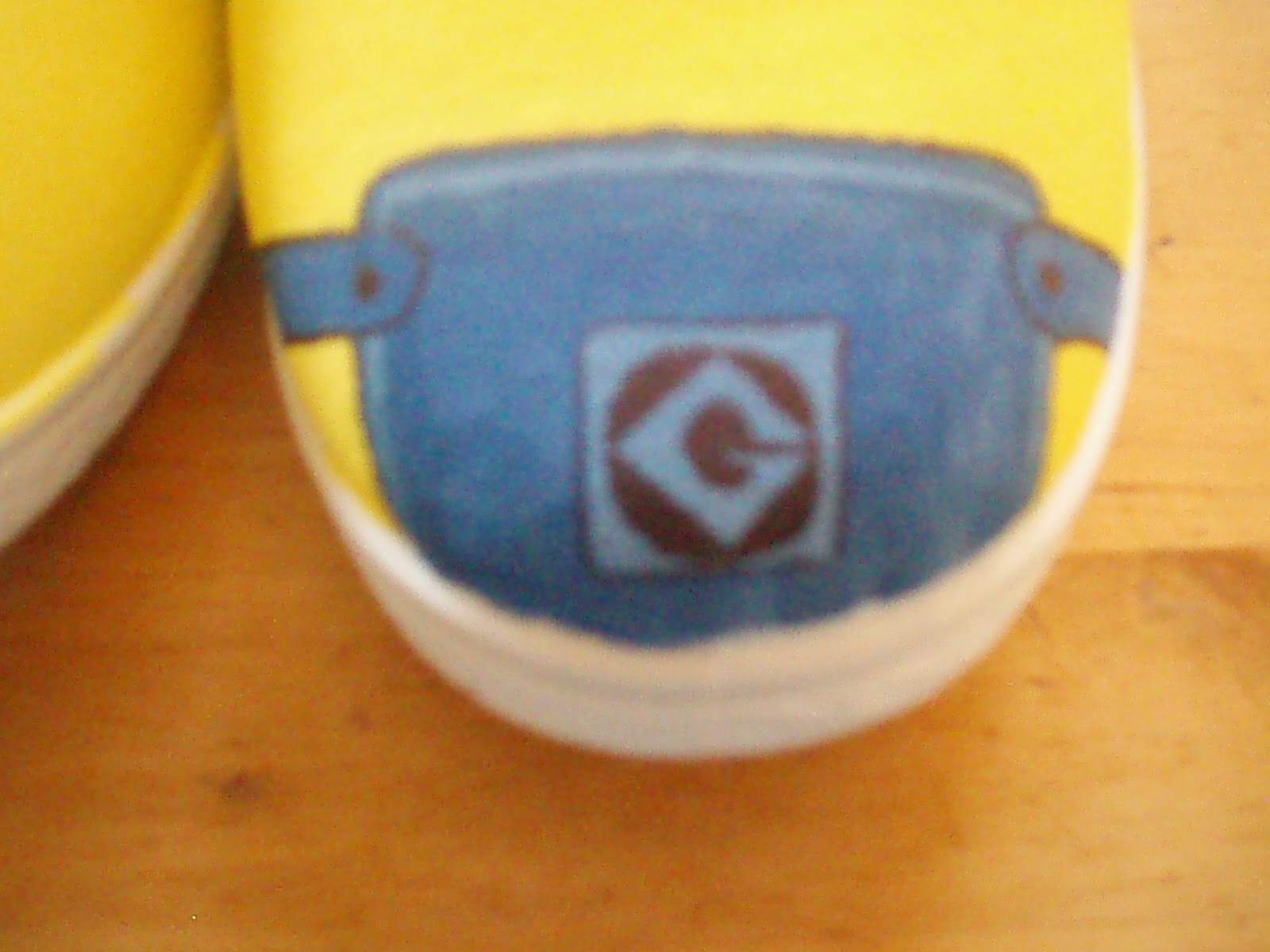 And because someone at work saw the minion shoes and requested it - Toy Story shoes!
"The claw is our master. The claw chooses who will go and who will stay"

Noticed a bit of an out of space theme to my blog for the last week? Pluto, space bat, planet pizza aliens? That happens to be a total coincidence. 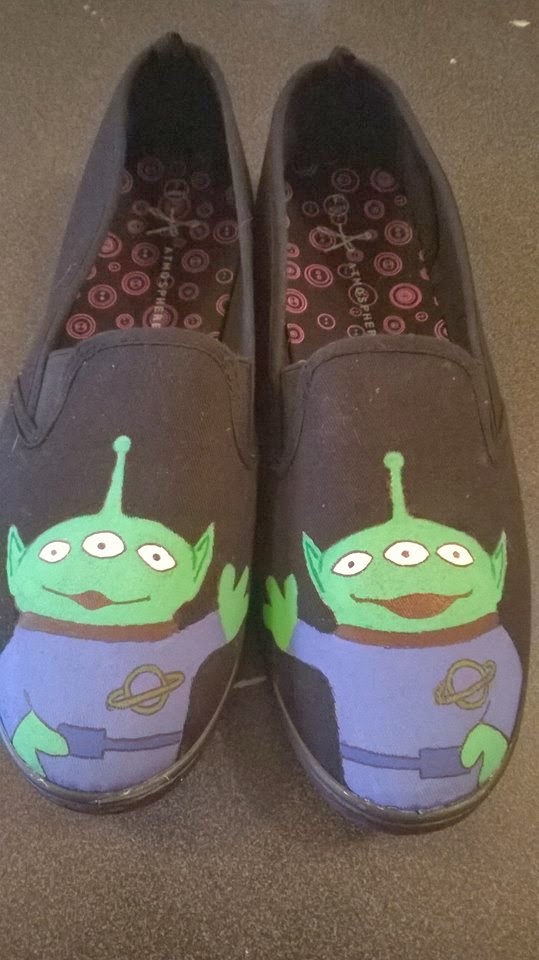 Posted by minipoppy at 2:08 PM No comments:

From Wikipedia: In 1990 NASA launched space shuttle mission STS119 to the International Space Shuttle. During countdown a bat was seen to be resting on the external tank. NASA had believed the bat would fly off once the shuttle started to launch, but it did not, and it was probably shaken off and incinerated by the rocket exhaust. A bat doctor believed the bat had a broken wing which made it unable to fly off.

There are *bat doctors*!! 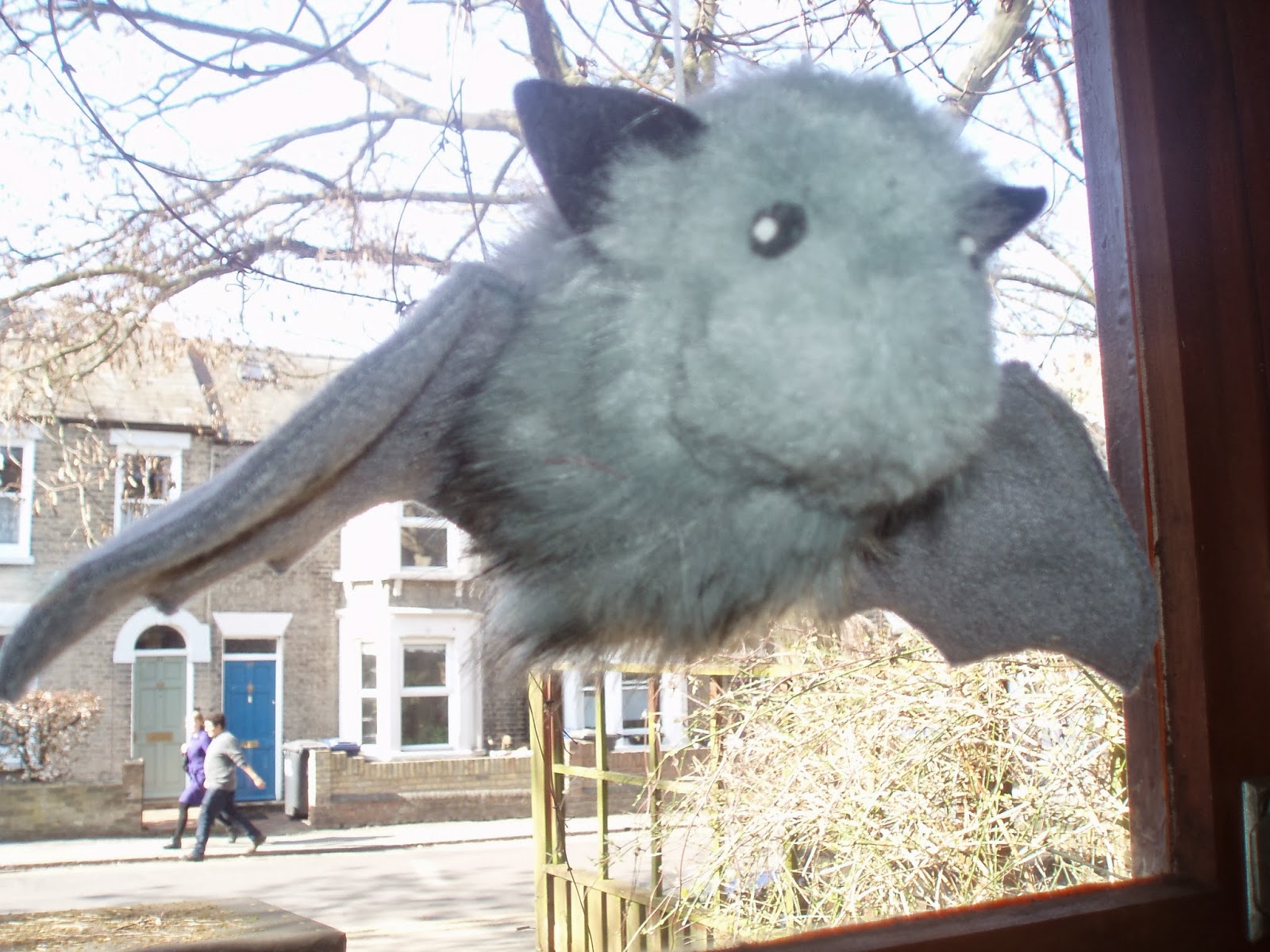 Why am I telling you this? Here is what the wikipedia entry *should* have said:

Bereft of his ability to fly and with nowhere to go, a courageous bat climbed aboard our Discovery with stars in his weak little eyes. The launch commenced, and Spacebat trembled as his frail mammalian body was gently pushed skyward. For the last time, he felt the primal joy of flight; for the first, the indescribable feeling of ascending toward his dream—a place far away from piercing screeches and crowded caves, stretching forever into fathomless blackness.
Whether he was consumed in the exhaust flames or frozen solid in the stratosphere is of no concern. We know that Spacebat died, but his dream will live on in all of us.

Got a little something in your eye there??

The head fur was trimmed to show the shape of his face, the body I left long with the black tinged ends, I am rather pleased with it. 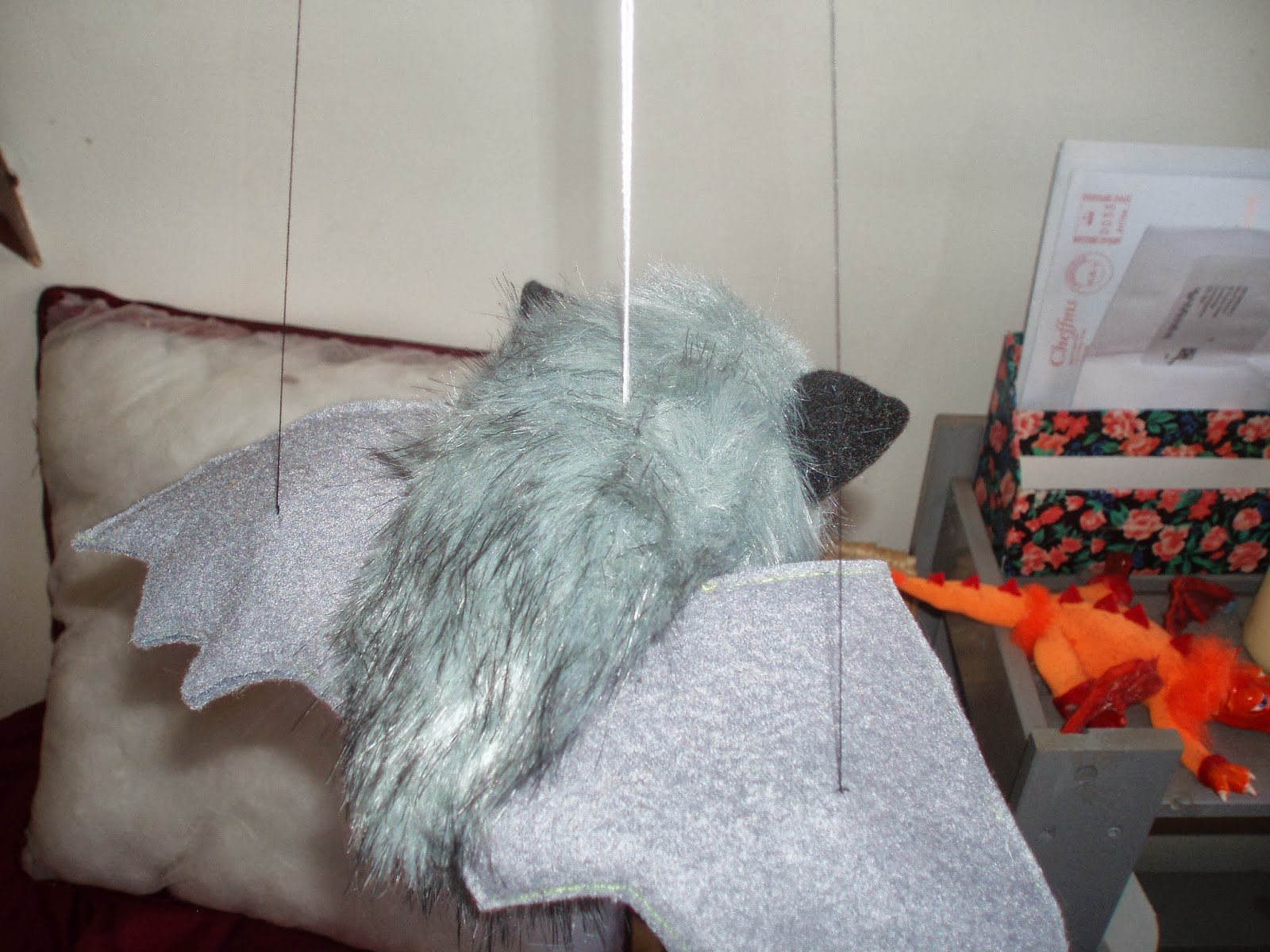 Just hanging out in my window. 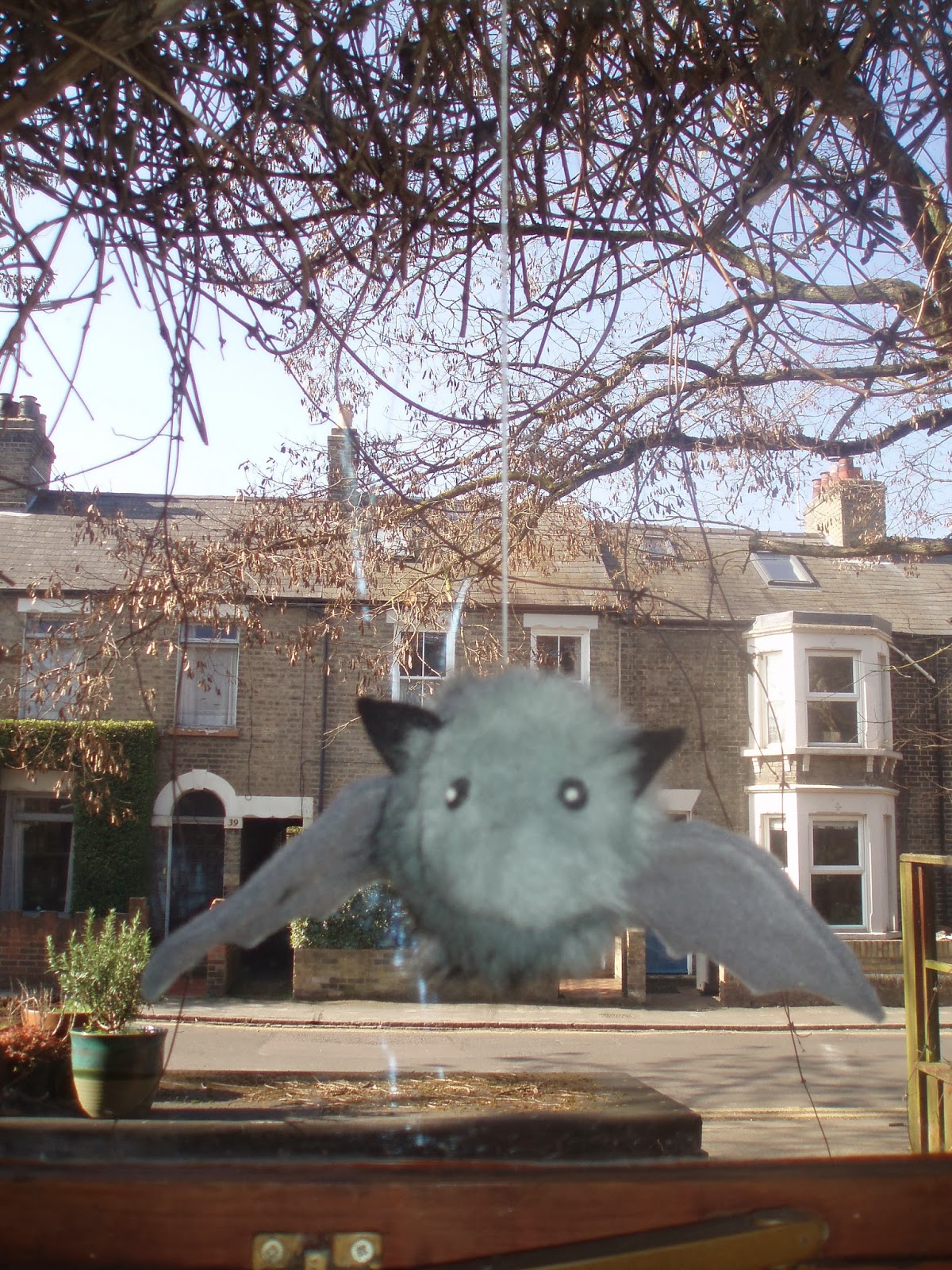 Posted by minipoppy at 1:51 PM No comments:

It is Veronica Mars day!!!! I now have the complete script from my Kickstarter reward, hours before I can watch the move. Not reading it is killing me.

Not even this chilled out teddy bear can help. 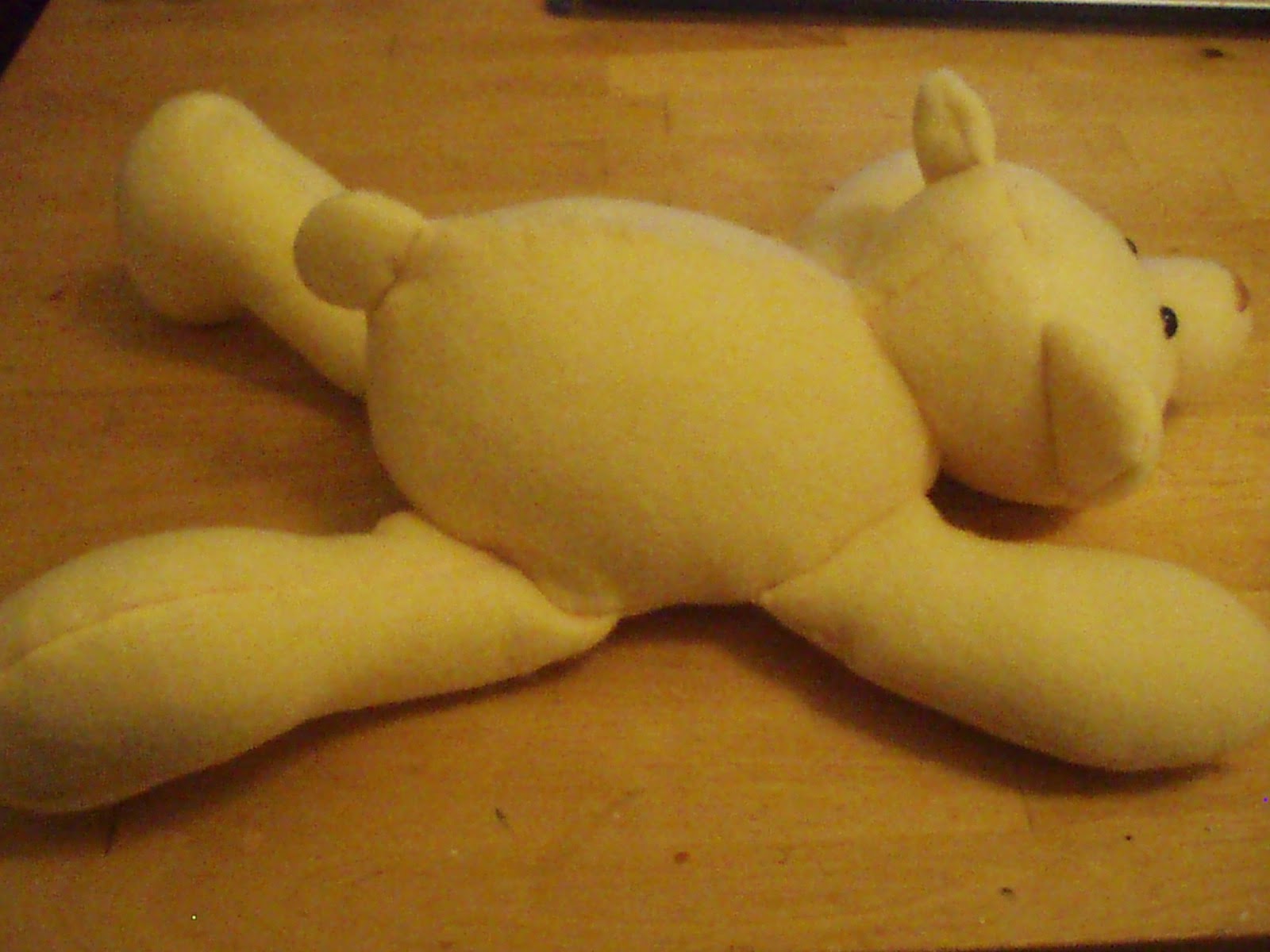 What does a teddy bear have to do with the Nancy Drew of Neptune, you ask (if you don't know your VM very well)...

Erstwhile enemies, now secret love bunnies from Season one:
Veronica - Do you think this thing... will ever get more normal?
Logan - What, like, will we ever hang out at the mall, or hold hands and buy each other teddy bears that say 'I wuv you beary much'?
Veronica - Yes. Exactly that. Except I want my bear won through some sort of demonstration of ring tossing ability. 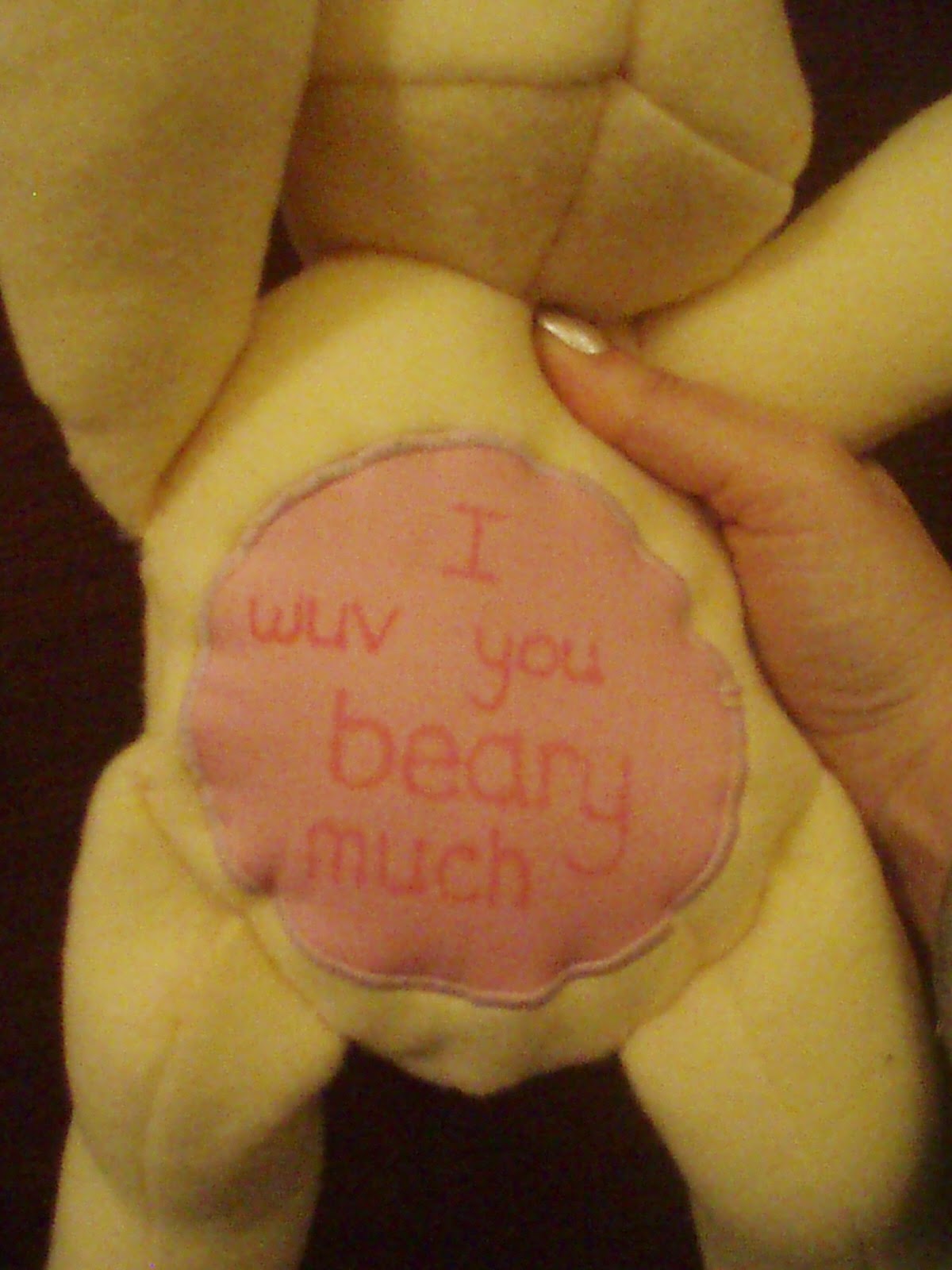 It was either a teddy bear or a unicorn. What girl doesn't love unicorns?

Love-belly teddy looks sad that he is not a unicorn. 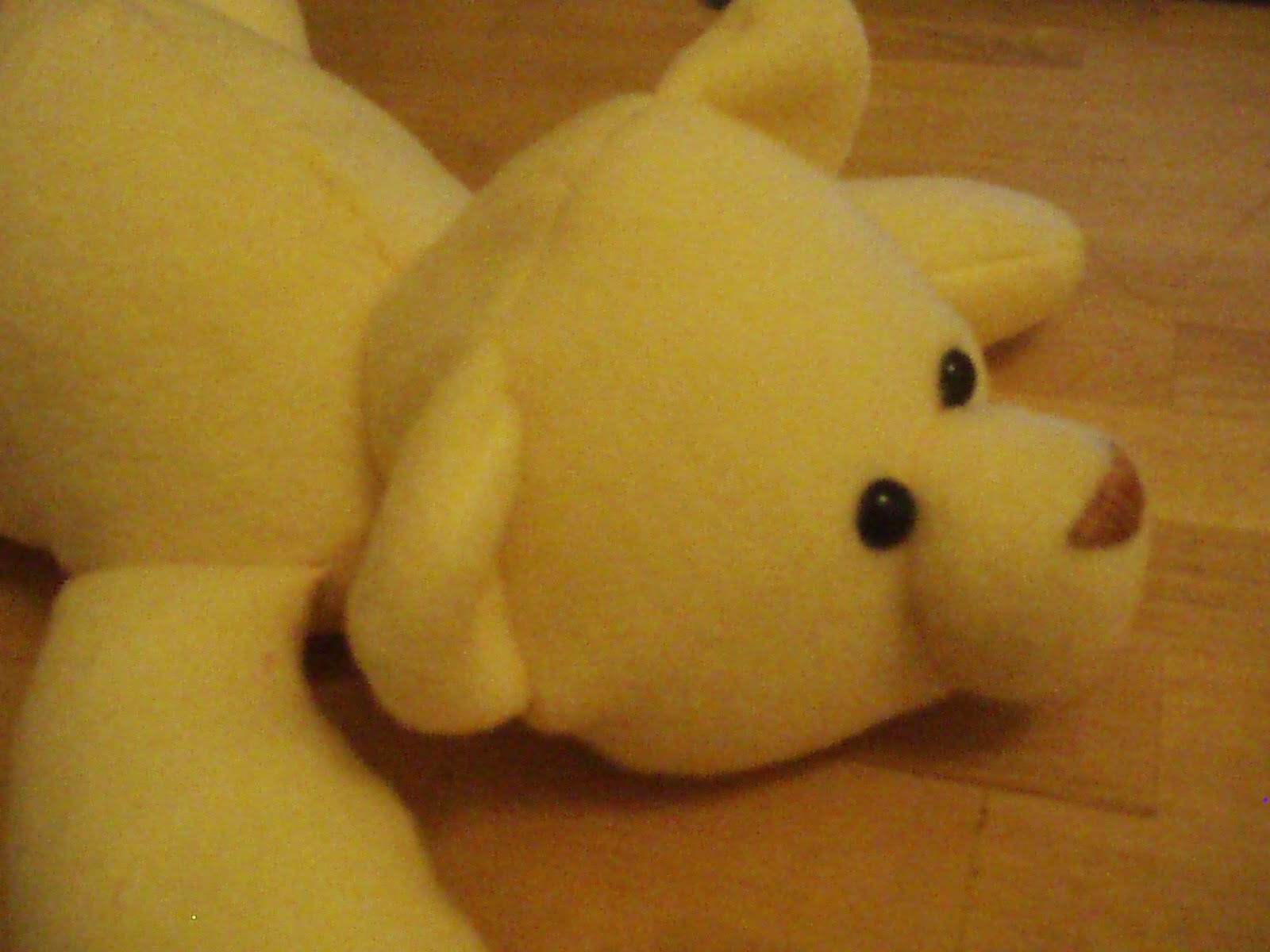 Posted by minipoppy at 12:39 PM No comments:

In 2006 the IAU announced that a "body can only be called a planet if it orbits the sun, is large enough to have become round due to the force of its own gravity, and has swept its orbital neighborhood clean of large objects."
And thus Pluto was demoted from planet to dwarf planet [1]. 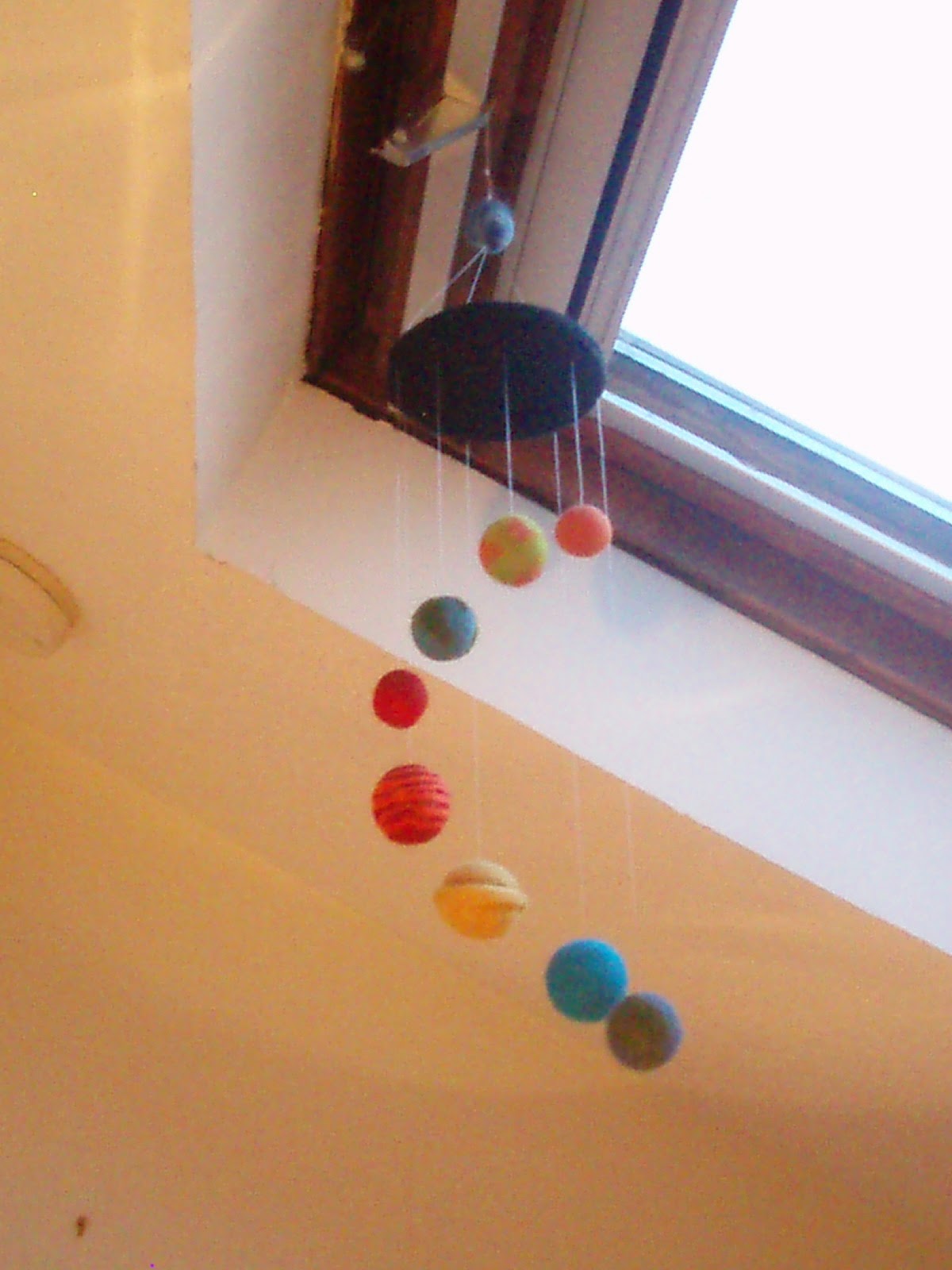 (Planet mobile!)
And it was all very sad for Pluto who may well have been the most anthropomorphised lump of rock ever, or at least until some wit stuck a black cape on a stone and called it Lord Bouldermort. 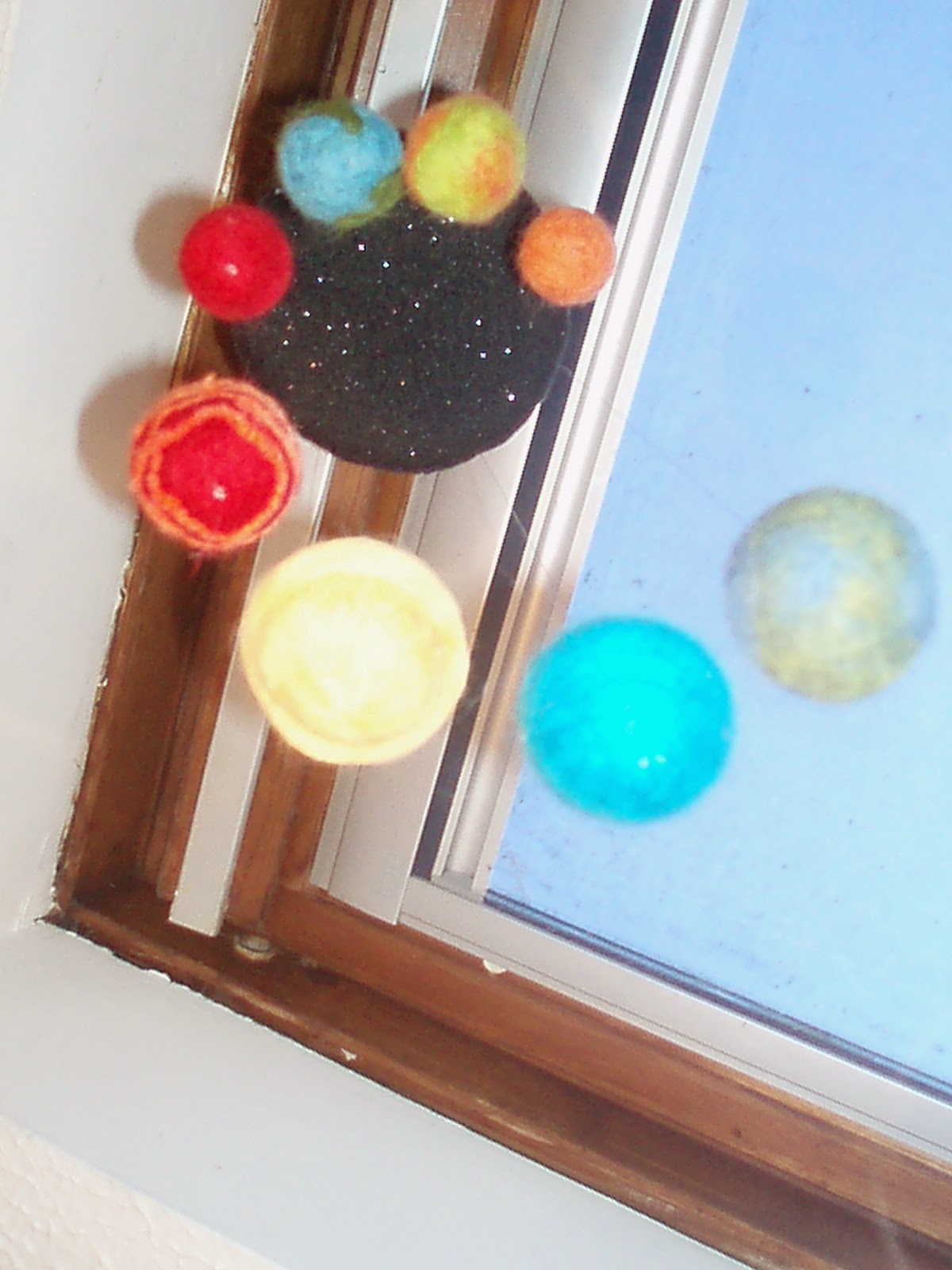 (looking from underneath, the material on the frame of the mobile is black with sparkly 'stars'!)

Some scientists [2] argued that the low turn out at the vote [3] and the fact that the IAU's field of expertise is astrophysics not planetary science mean that they were wrong in deplanetifying Pluto. As far as I can see the IAU's main response to that came from Michael Brown. "Most astronomers, he said, have moved on." 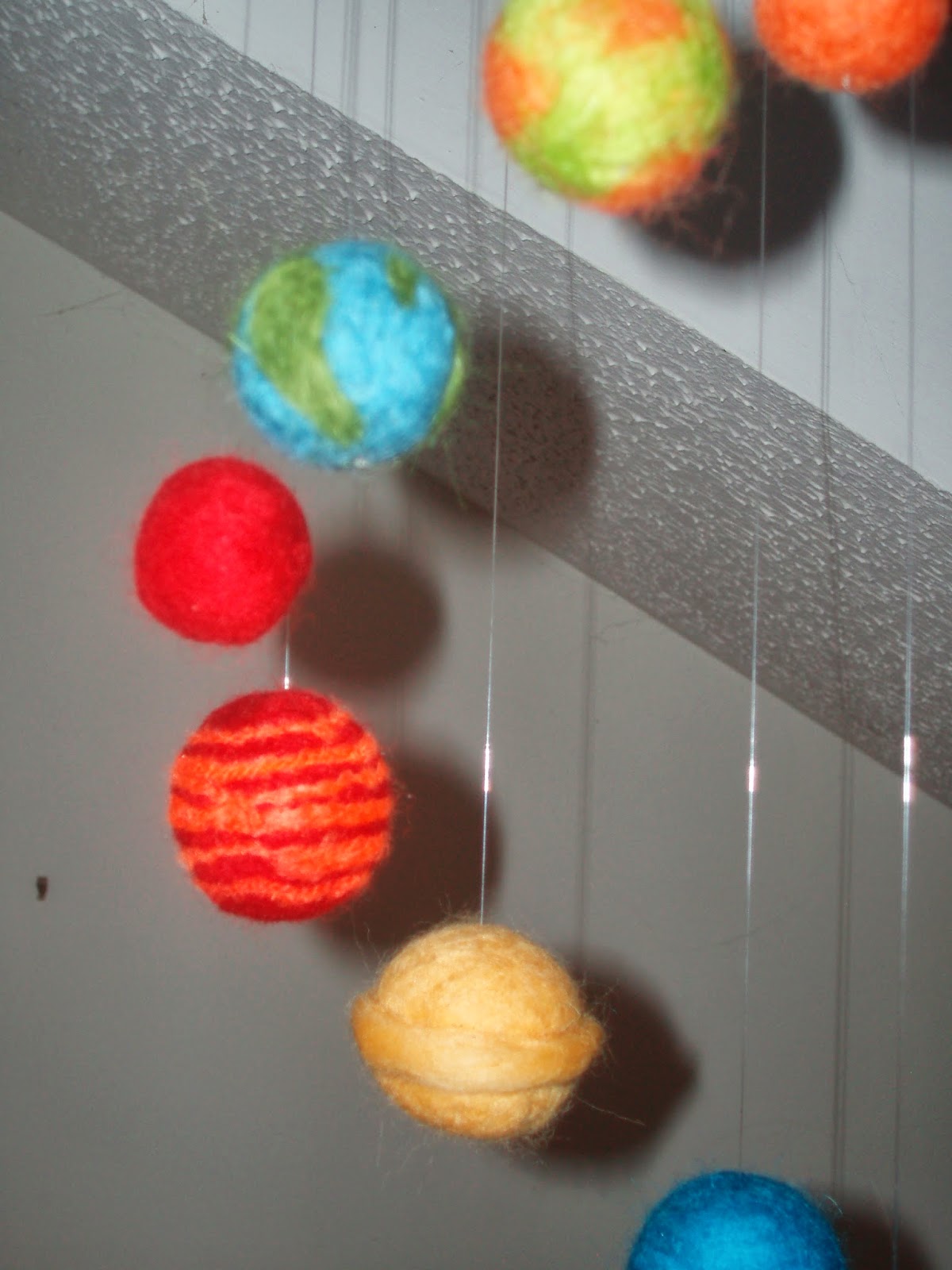 So New Mexico passed a legislation in 2007 declaring March 13th Pluto Planet day and for that day granting it planet status. Illinois also tried something similar, a one off in 2009. Michael Brown, ever the buzzkill, however stated that Illinois' resolution was "very silly" and that it could be "dangerous to the public understanding". If there is one thing we can be certain of is that Brown does *not* have a "Your mum thought Pluto was big enough t shirt"

Anyway, to celebrate Pluto Planet Day, I snuck Pluto into the mobile, it is above the rest, helping to keep the wires to the frame untangled.  You can see its location better if you go back to the first picture. 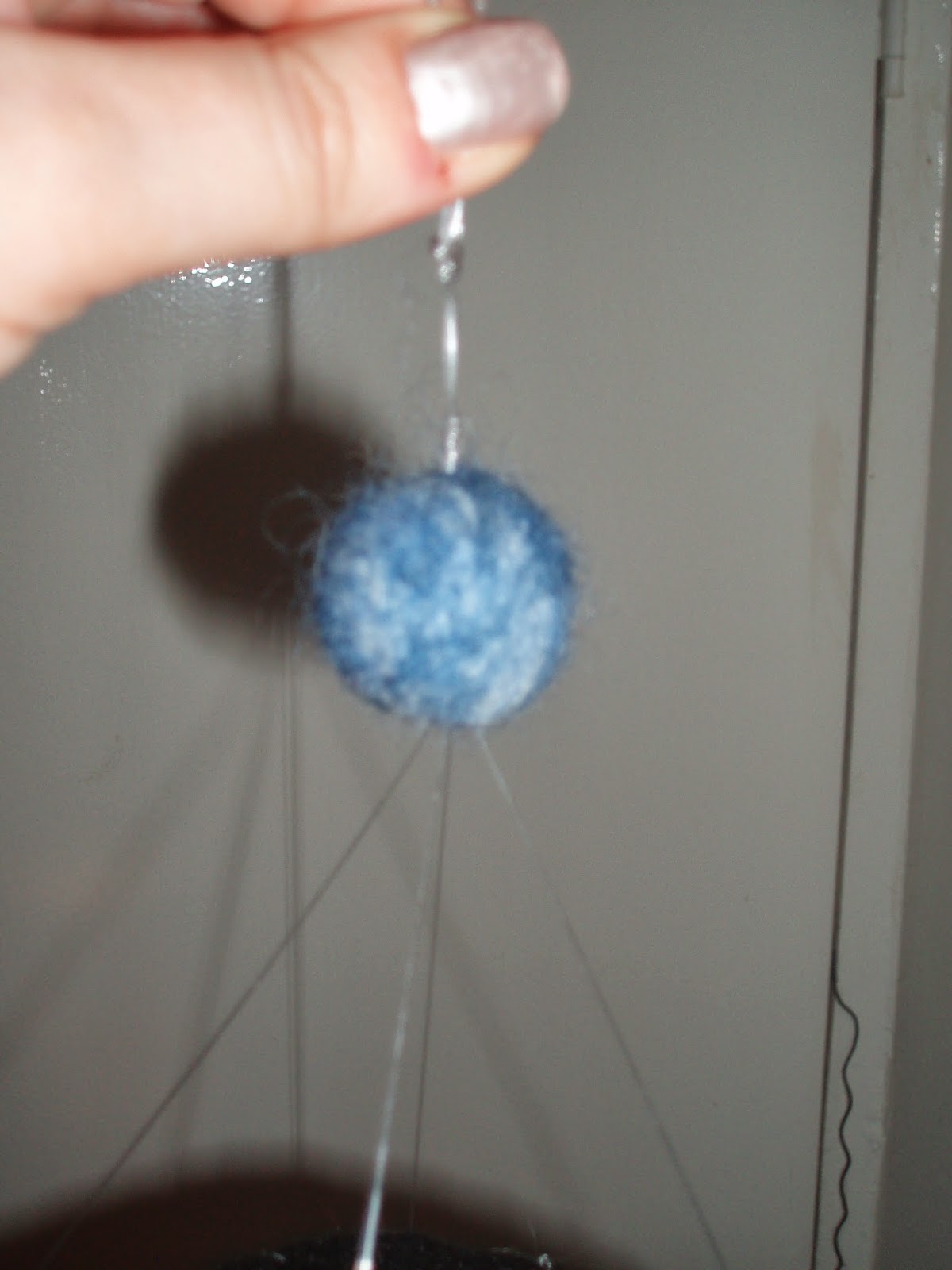 Footnotes
[1]Failing on the last criterion - one of its moons, Charon is half the size of Pluto.
[2] Notably (at least in my half hour research) Alan Stern
[3] Just 424 voted. Out of how many no one seems willing to tell me, but I guess you need a couple of thousand scientists to totally get rid of a planet.
Posted by minipoppy at 6:39 PM 1 comment:

When Fluttershy tries to commune with the vampire fruit bats she turns into evil scary Flutterbat.
I had some spare material and I got to use a setting on my sewing machine that I really should use more, so I thought I'd knock this together. Aw heck, who am I kidding - there is no justification for this 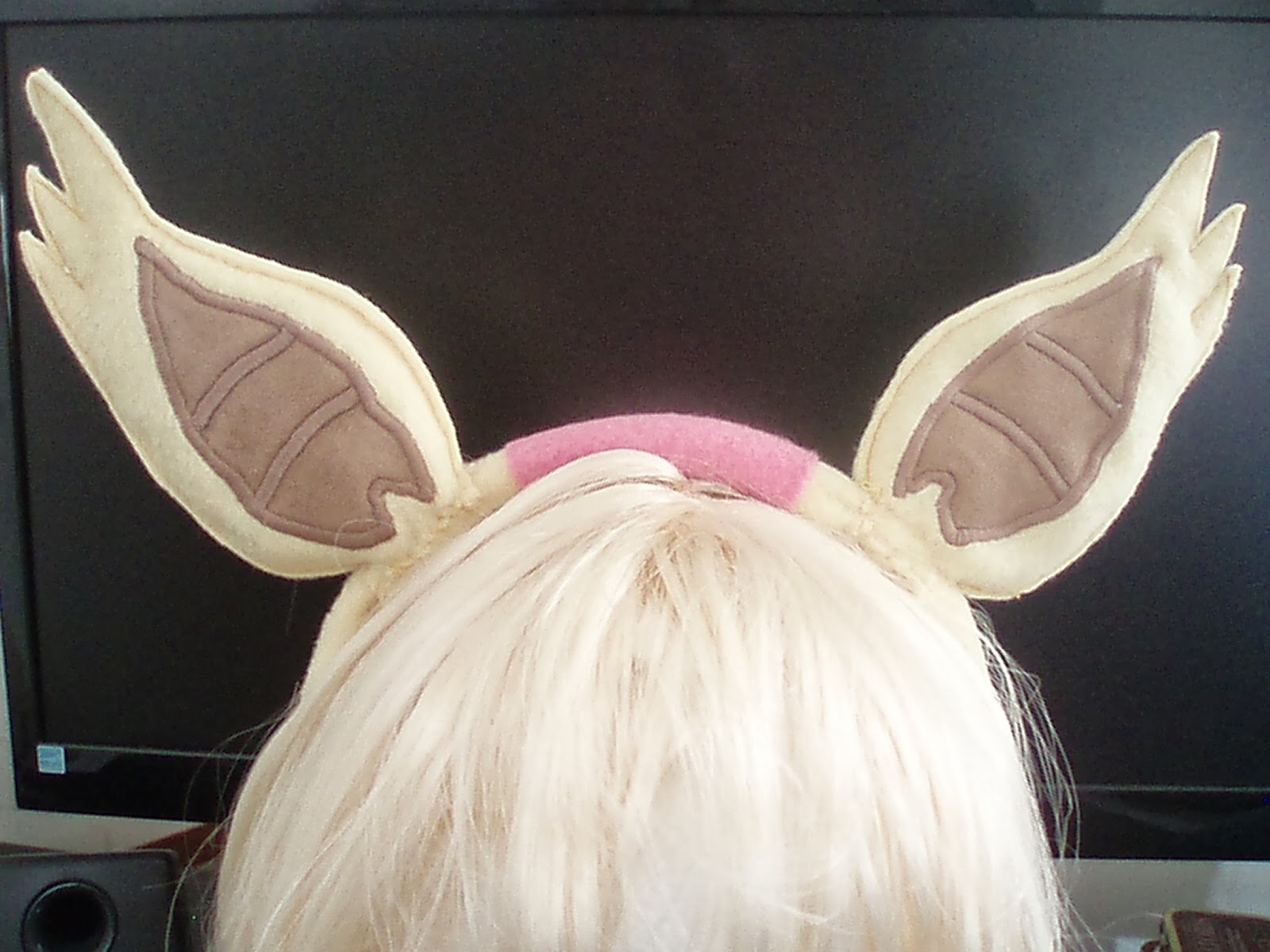 Undecided about the pink bit in the middle, it is easily removable though so for now it stays. 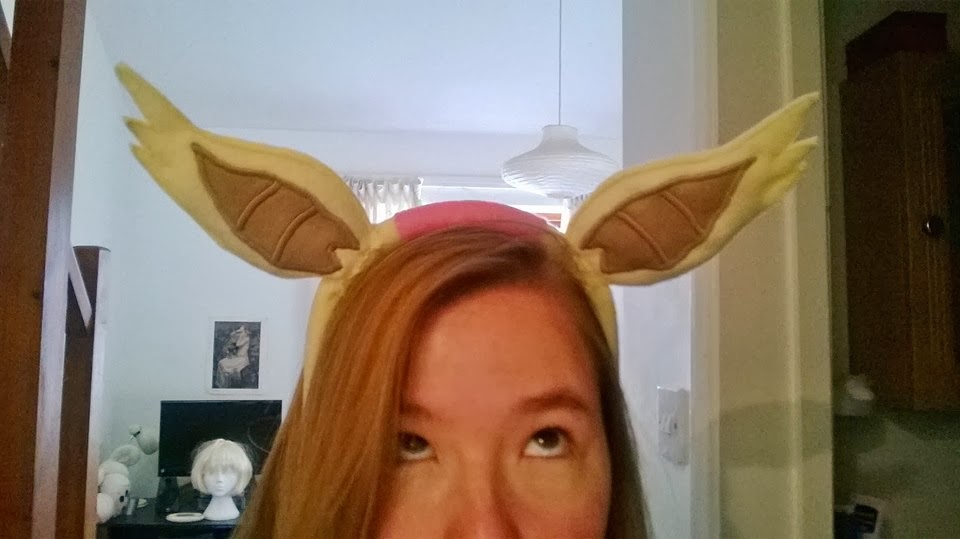 Posted by minipoppy at 4:42 PM No comments:

It seems like I have been making Elliott for*ever*. Every time I thought I'd finished I'd remember he had wings (of course!) or the legs just wouldn't look right.

This is a little image heavy so I've put the side/back views after the cut. But do click through or I will feel that all those little spikes I made were to no purpose! 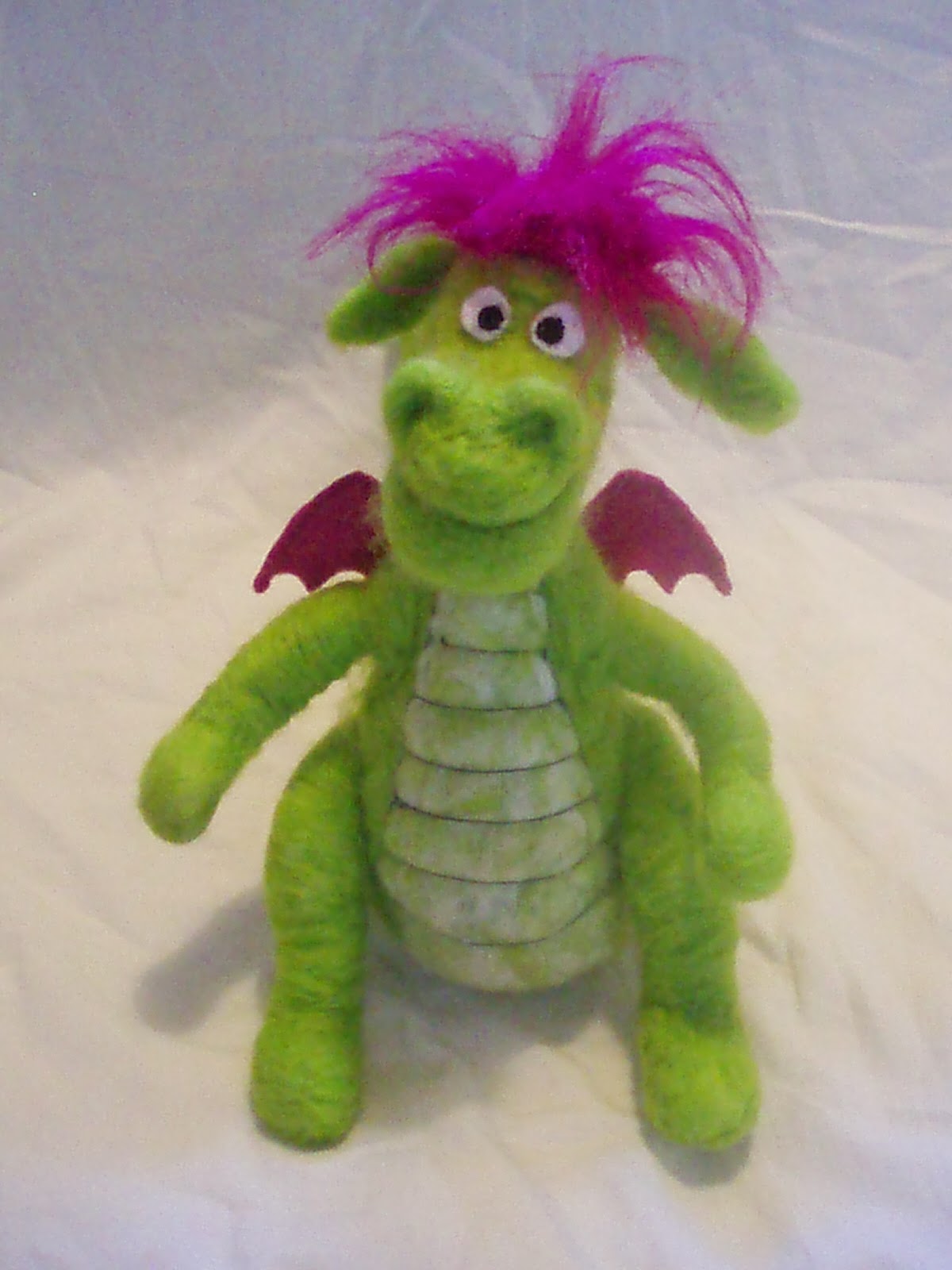 Read more »
Posted by minipoppy at 8:28 AM No comments:

I found myself with a couple of hours to kill and some spare red wool roving so I thought I'd make a teeny strawberry fruit bat. Because, why not. 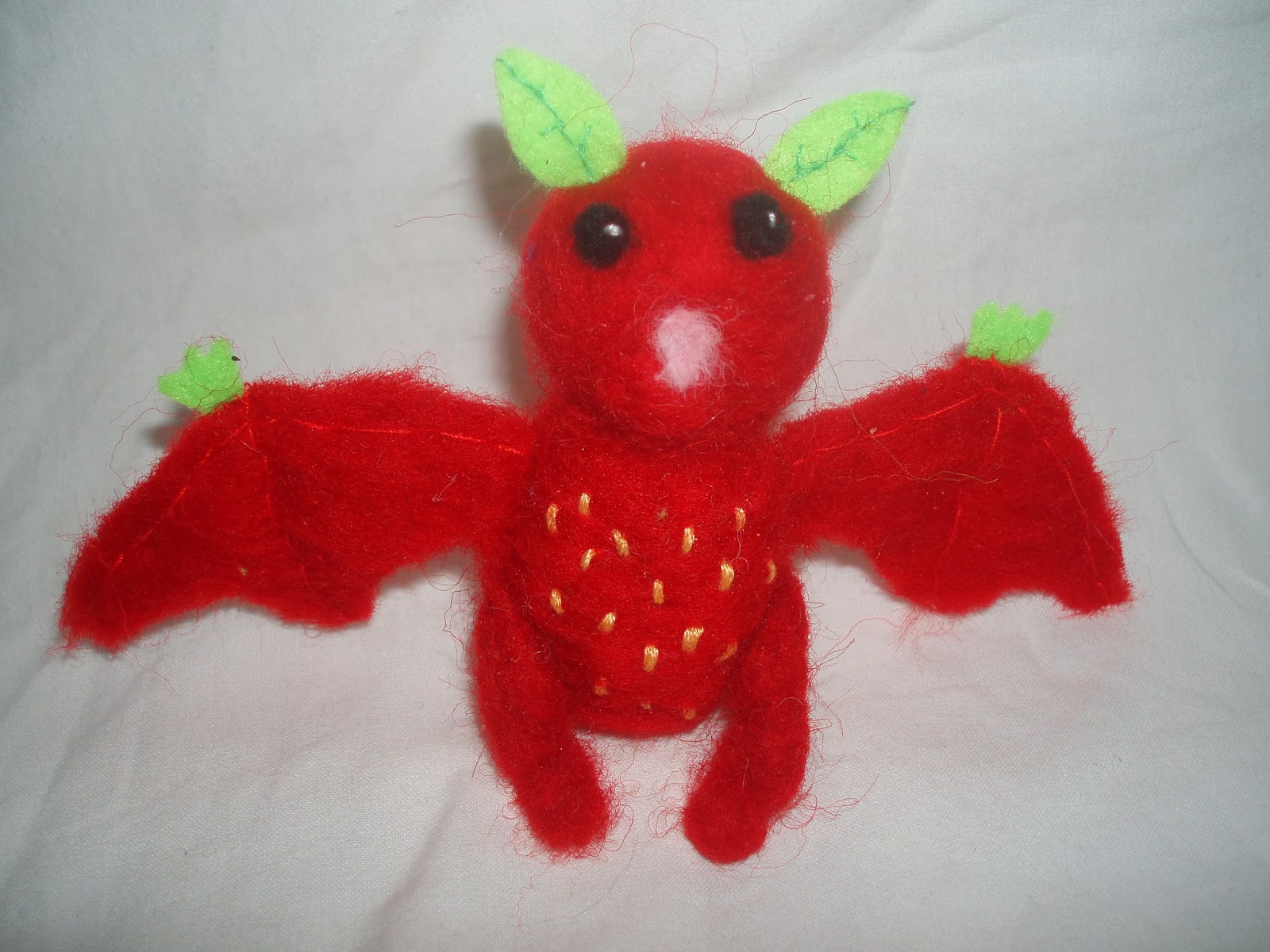 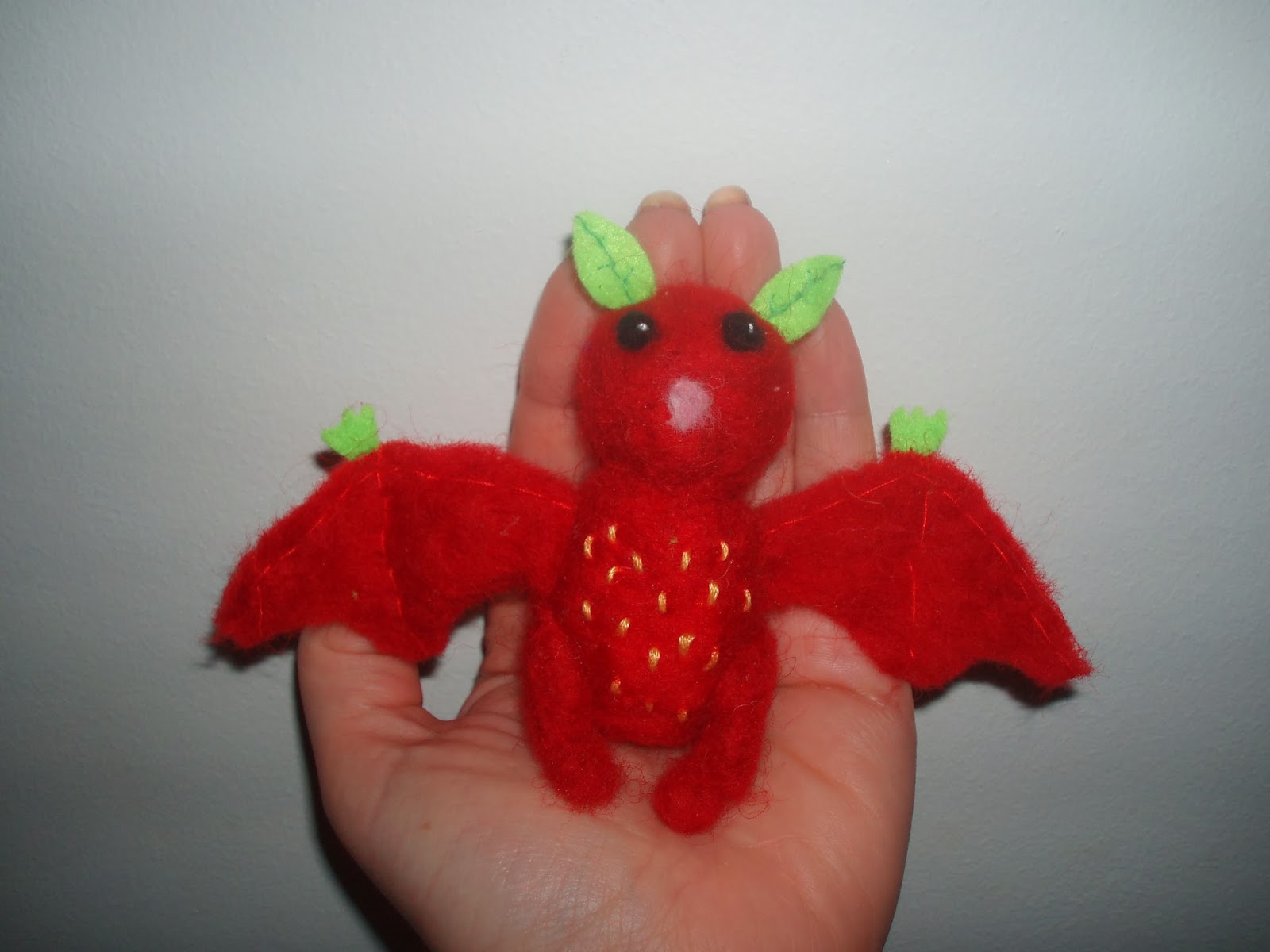 Posted by minipoppy at 6:55 PM No comments: