Another longer one (relatively speaking). This one is about the machinery behind the workings of the universe, which is controlled by a little old man. I have had this story in my head since about the age of 10, and I have tried writing it again and again, once as a poem, once as a full scale book. I think this is the best version although the start of this could do with much improvement. But stick with it, it gets better!

It has been suggested that I am a little niche in my craftings, a little bit too ... nerdy for a lot of people. So, here is something non geeky that I made for my bedroom. It hangs above the stairs where I will meet it at eye level every morning when I get up.

The elephant's ears and nose are 3D! 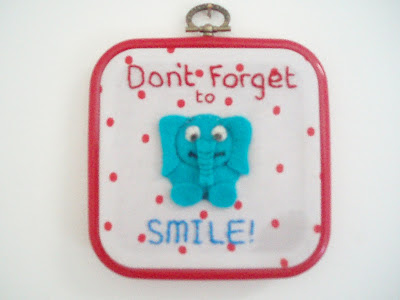 And after about 13 years of having a stuffed gorilla called Ronnie with no nose (no jokes), I finally got round to fixing him. He also had a nice fur brush as well, so Ronnie is feeling about as dapper as a 15 year old gorilla can feel. Happy Ronnie! 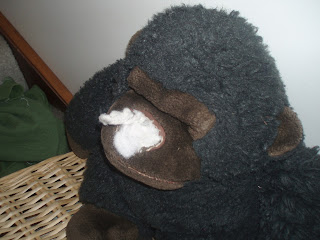 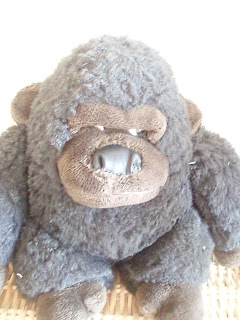 Posted by minipoppy at 5:57 PM No comments:


From the moment the James Baxter Adventure Time episode aired until this very moment will be a period of time that shall henceforth be known as the period I didn't have a James Baxter embroidery hoop. 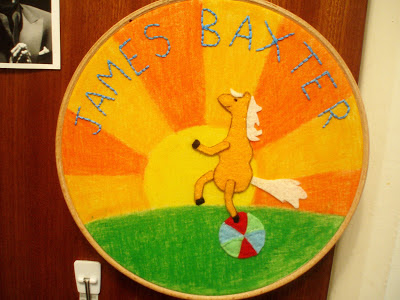 Oh my glob you guys. I was given 50 metal keyrings, so I guess I should get to it.. 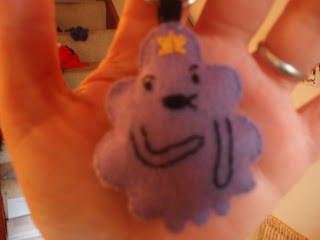 Posted by minipoppy at 12:52 PM No comments:

I have a slightly longer Friday Fiction for you this week.
The Book

This is a fairy-tale story of love and deception. Throughout the story, the narrative style meanders slightly (eg from fantasy to serious descriptions of human emotion), which I quite like, although I suspect it is a negative thing really

I don't know why, but I do really love this quote. Pretty much everything that comes out of Oz's mouth is quote worthy actually. I think it is a bit plain, perhaps needs a border, but the hoop is only about 6cm wide anyway, so we're not dealing with loads of space here.

Quite proud of the Buffy font B embroidered at the bottom. 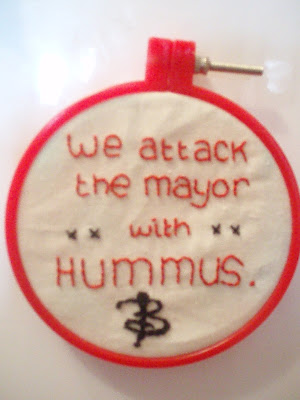 There's some great quotes about books in Game of Thrones, mostly said by Tyrion, which all seem excellent candidates for kindlecoverfication. Here is one such quote/kindle cover combo. 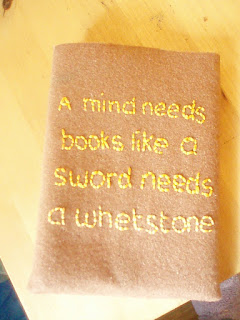 Let's do something slightly different for this Friday Fiction.

Here's a triptych of three unrelated poems, about Oranges, rabbit sex and the love of two potatoes.

Believe it or not, I actually bought a pattern for this little fella - I never buy patterns usually but the finished results looked so good. And I wouldn't like to say anything negative about the shop because the lady seemed sweet, but I can't help but thinking his bum is too small, ears too big... 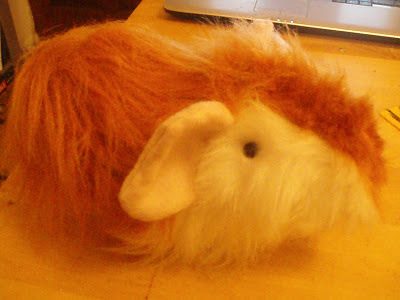 ...and the claim that he is life-sized is... intriguing. 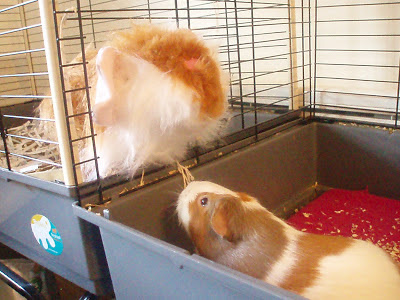 I originally wanted to make a fake guinea pig so that I could dress it up, deeming that to be less sad than making clothes to dress up my real pigs in. Jury is still out on the relative sadnesses.

Nevertheless - had to be done... 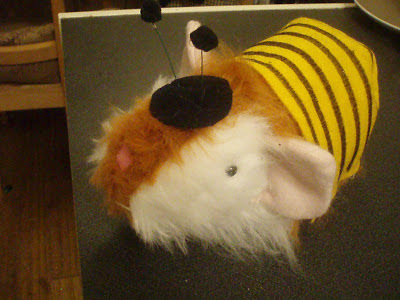 A giant fake guinea pig dressed as a bee. 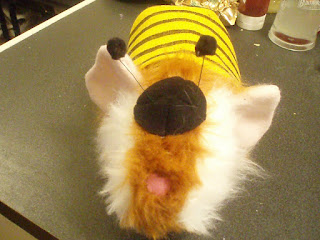 And then there's this little penguin 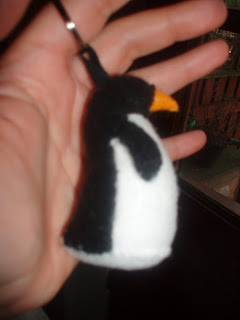 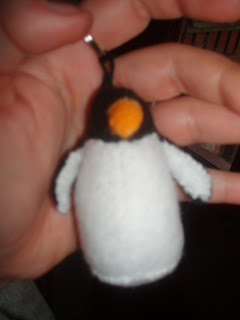 And finally this wire armature dragon. It looks really bad in the photos because I am not very good at taking pictures of small painted things. In real life it is still pretty flawed but in different ways. Which is annoying. 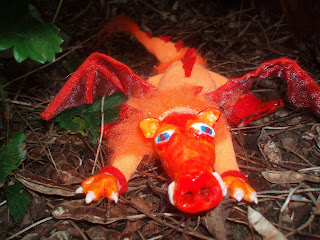 His arms and legs are wired and thus posable, as are the wings. 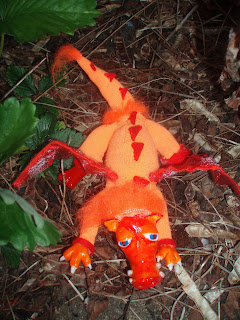 Posted by minipoppy at 1:05 PM No comments:

Hello. If you remember last week I said I would be posting some old stories I've written on a Friday. After all, they don't really *expect* you to work on a Friday afternoon right?

Here's an oldie, about God, Noah and the WI.
And a picture of Tess. Just because. 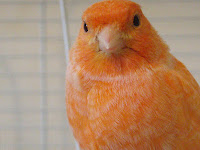 What time is it?
Bacon pancake makin' time!

Incidentally, I made bacon pancakes, they are delicious. 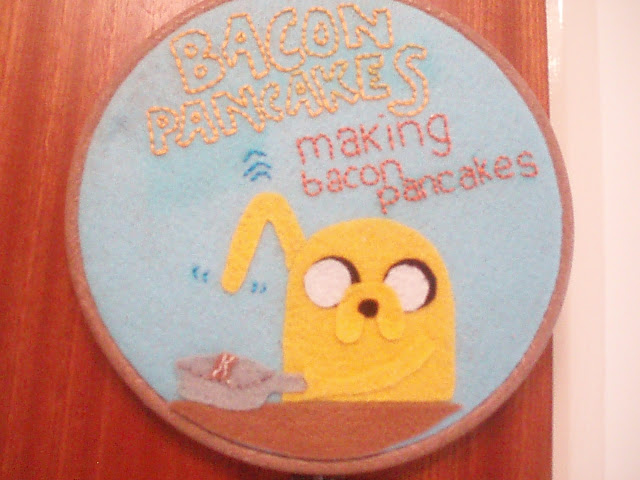 Posted by minipoppy at 5:43 PM No comments:

Oh hey, while tidying up my work computer I found some old bits of writing I'd done which I assumed had disappeared forever. So, to make a change from the usual picture heavy weirdness, I thought I'd share some wordy nonsense with you. I'll try and remember to update on a Friday, mostly just for the alliterative opportunity.


Here's the first, a short little story about a new type of deadl-ydorable assassin. Enjoy!

All the Mikes and some hats

So, here it is. The maxi mini Mike hat.

Mini mike came first, made last year, and I am not sure of the exact moment when I decided Mike actual needed an oversized hand hat - it feels like I have always wanted to make it, but whenever it came about - here it is.

Brim is a bit twisted here, but you get the idea. What amused me was that Mike was terribly upset that both he and mini mike had a beer (see the guinness in his hand) and maxi mini didn't. We decided if he got drunk he had the furthest to fall. 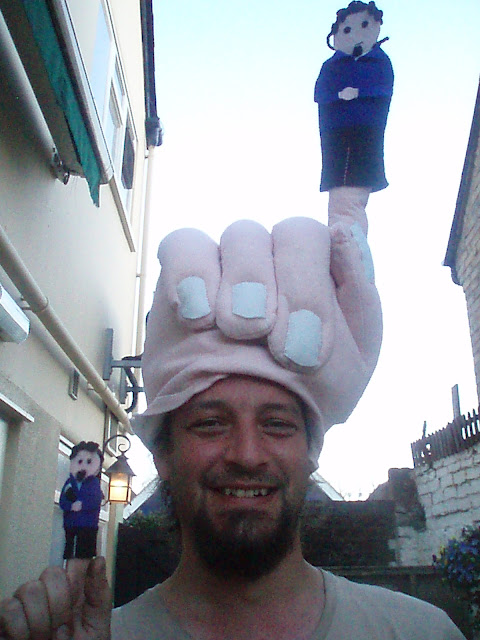 Now, I made this pretty quickly the night before the hat competition, and I winged it somewhat, so it is far from perfect, eyes too big, ears too small. But this is a Doctor Whoovesesque 11th. Next time I am going to do it properly with the right material etc and make a Tom Baker MLP hat.
Poppy's pro tip: don't wear a Dr Whooves hat in the company of numerous bronies. 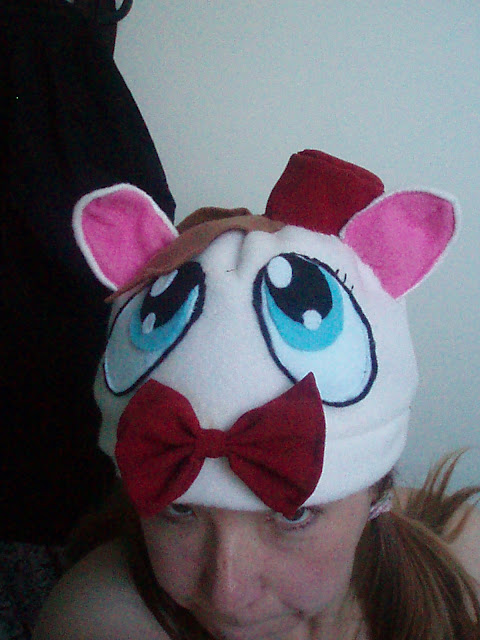 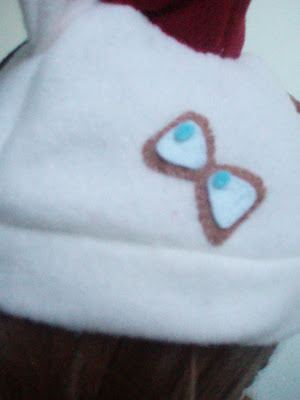 And, you've seen it before, but as it won second prize (jointly with maxi mini mike) you'll jolly well see it again. Posted by minipoppy at 8:54 AM No comments: