No more hats for a few days, I promise 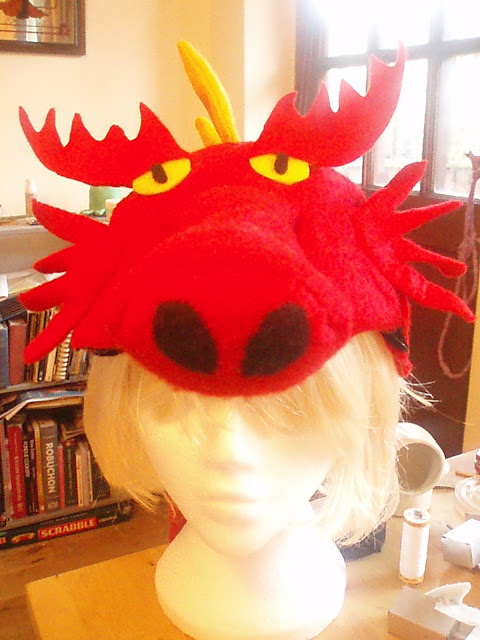 How I managed to make my dragon look so melancholy I have no idea. I was going for ferocious. 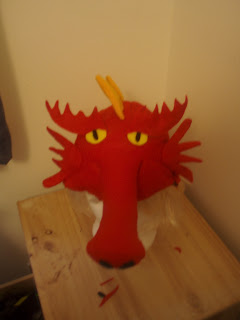 I think he is sad because he has such a big nose and the lady dragons don't fancy him. 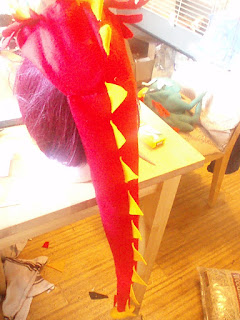 And, lest you were worried that I didn't go over the top, here is the back. After having test-driven it, I think that a pair of legs need to be added, to counterbalance the tail and nose, it is a bit see saw-y at the moment.
Posted by minipoppy at 5:27 PM No comments: 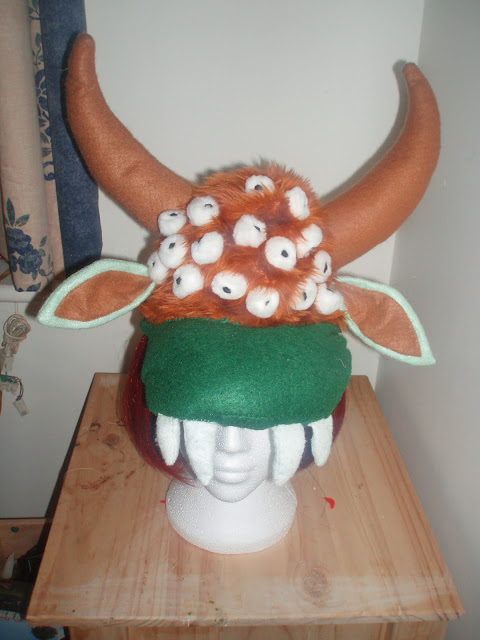 When, suddenly, the animator suffered a fatal heart attack... 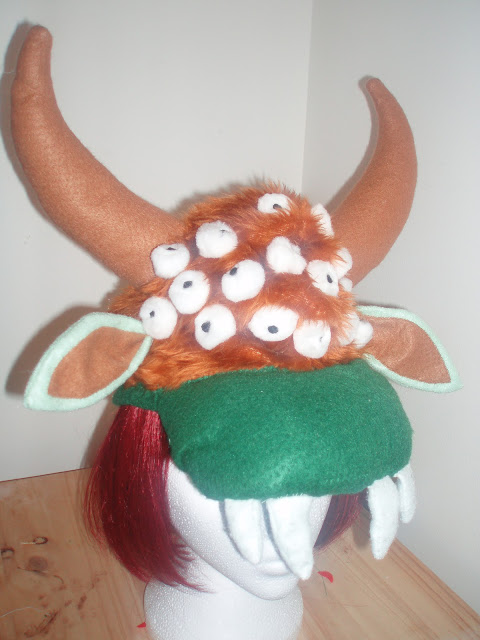 Posted by minipoppy at 1:31 PM No comments:

Never got the point of fascinators, but here's one I can really get behind. A brain slug fascinator.

As I am sure you are all aware, the brain slug is from Futurama. 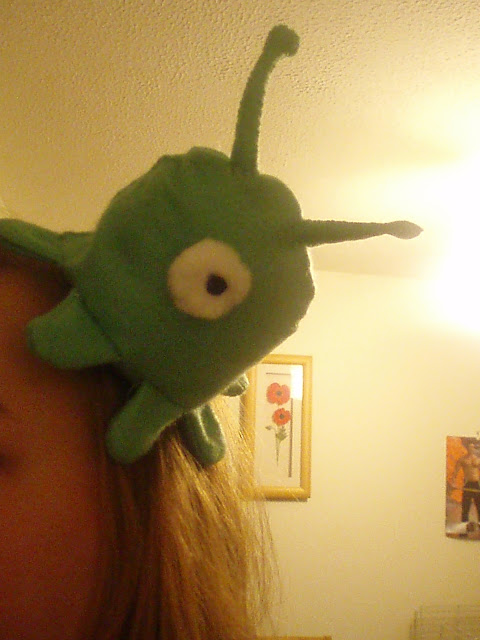 Posted by minipoppy at 9:28 PM No comments:

I really can't decide whether it is better for me to explain what the hell this is and why it exists, or whether I should just put the pictures out there and leave you guessing.

Ok, this is a birthday present for a very dear friend. It is loosely based on the Veebeam doodad (pictures here) which apparently within hours of release was being dubbed the lady saddle because of its shape. Said friend has something of a Benny Hill sense of humour in some matters, so he was delighted by the veebeam. So the idea of the present came from that. Making it into a seat was an attempt to make it more useful than a random plush rhomboid, and, well, it vibrated simply because I thought it would amuse him. 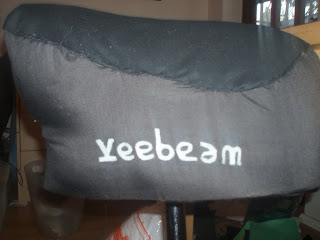 A side view, with the veebeam logo. You may be wondering how I made this into a chair. Well, the saddle itself is actually made around the skeleton base of an old bike saddle (bartered from Rocco's bikes in exchange for a cake in an egg), which is attached to a pole, which is attached to a sink plunger. The plunger does a very good job of keeping it steady on the floor, but sadly is not strong enough to keep the weight of the saddle upright when you aren't sitting on it. Maybe I should pop round Sally Ann's and see  if I can get an old desk chair with wheels. 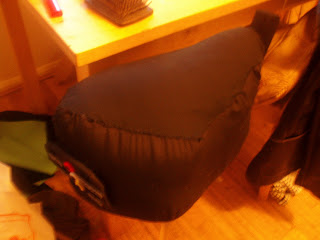 This is a side view looking foward. The square lumpy bit at the front is the detachable usb sitck that the Veebeam comes with. 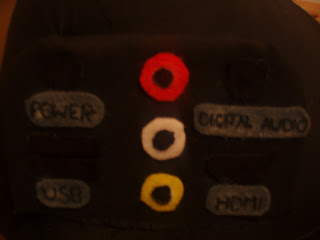 Here's the USB sockety thingy on the back. 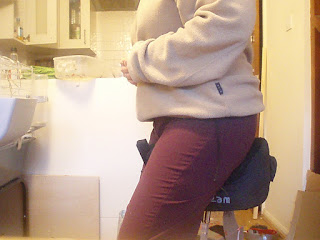 Being sat upon. My belly doesn't really go out as far as it looks like in this picture.See the USB stick poking out of the front? That, my friends, is detachable and contains the string for the motor which is safely esconced in the saddle itself. 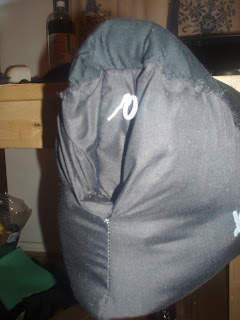 This is the front of the Veebeam, with the USB stick removed. No comments.

And finally, a short video to show you it being used, complete with seat wiggle and vibro action. But I seriously suggest you don't watch it because it makes the thing look a whole lot more filthier than even I had ever intended.

Posted by minipoppy at 7:55 PM No comments:

Can you guys believe that less than 6 short weeks ago I didn't own a single murloc hat? 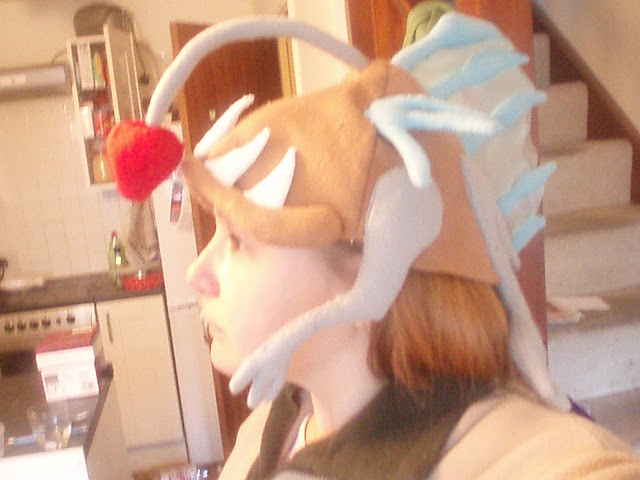 There is a good reason for this one. My mum wanted to borrow my murloc hat for when she goes to rugby matches (apparently silly hats are the norm) so seeing as dad got an early homemade birthday present in the form of the kindle cover I thought it only fair that she gets a very early present, in the form of a murloc hat in the Harlequins colour scheme, which is her team of choice. It is quite hard to tell the light blue from the grey in that picture, so this one may help. As you can see, I finished this off on a messy table, with a glass of wine, and Mary Poppins on in the background. Spit spot. 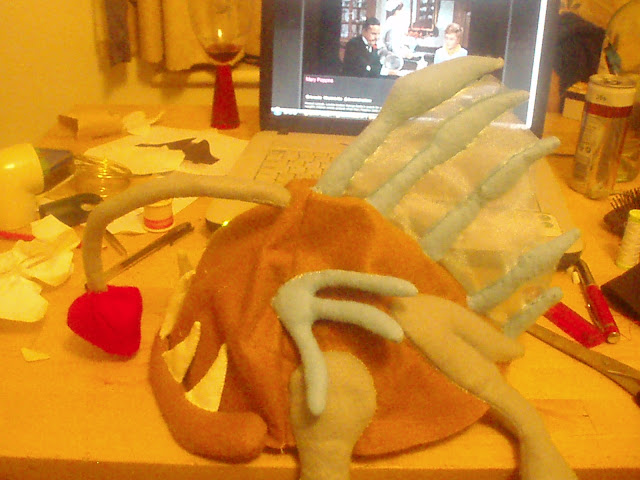 Posted by minipoppy at 11:47 AM No comments: