Cabin in the Woods Quiet Book (contains spoilers - sort of)

So there are these things called quiet books that you give to small children to keep them occupied during car journeys, apparently.
This all started when someone made a Star Trek quiet book, and then I found a Buffy book. And I got to thinking someone *really* needs to do a Cabin in the Woods quiet book. I mean... come on, think about it!

Sorry there are going to be a lot of pictures. [ETA: and not a few videos in which I scream. I actually didn't know it was picking up sound, I was making the noises for my own amusement, and having posted it I'm not redoing all the videos now!] 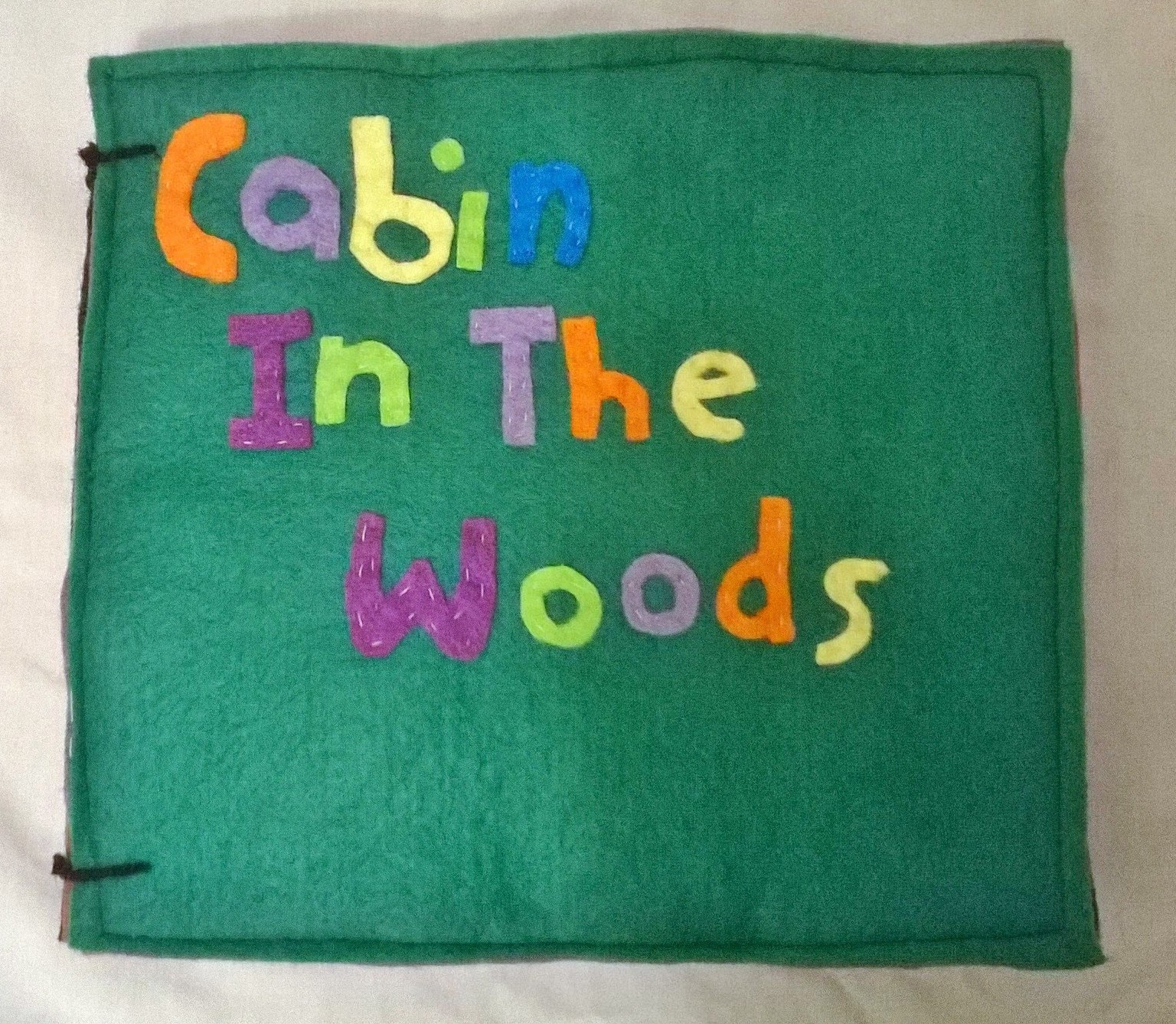 Click through for the pictures in all their gory fabulousness.

Pages one and two: on the road.
Go some place for one God damn weekend where you can't globally position my ass.

I decided I just didn't have enough room to include the harbinger.

Pages three and four: exploring the cabin.
I'm living in a womb of reefer, leave me alone. 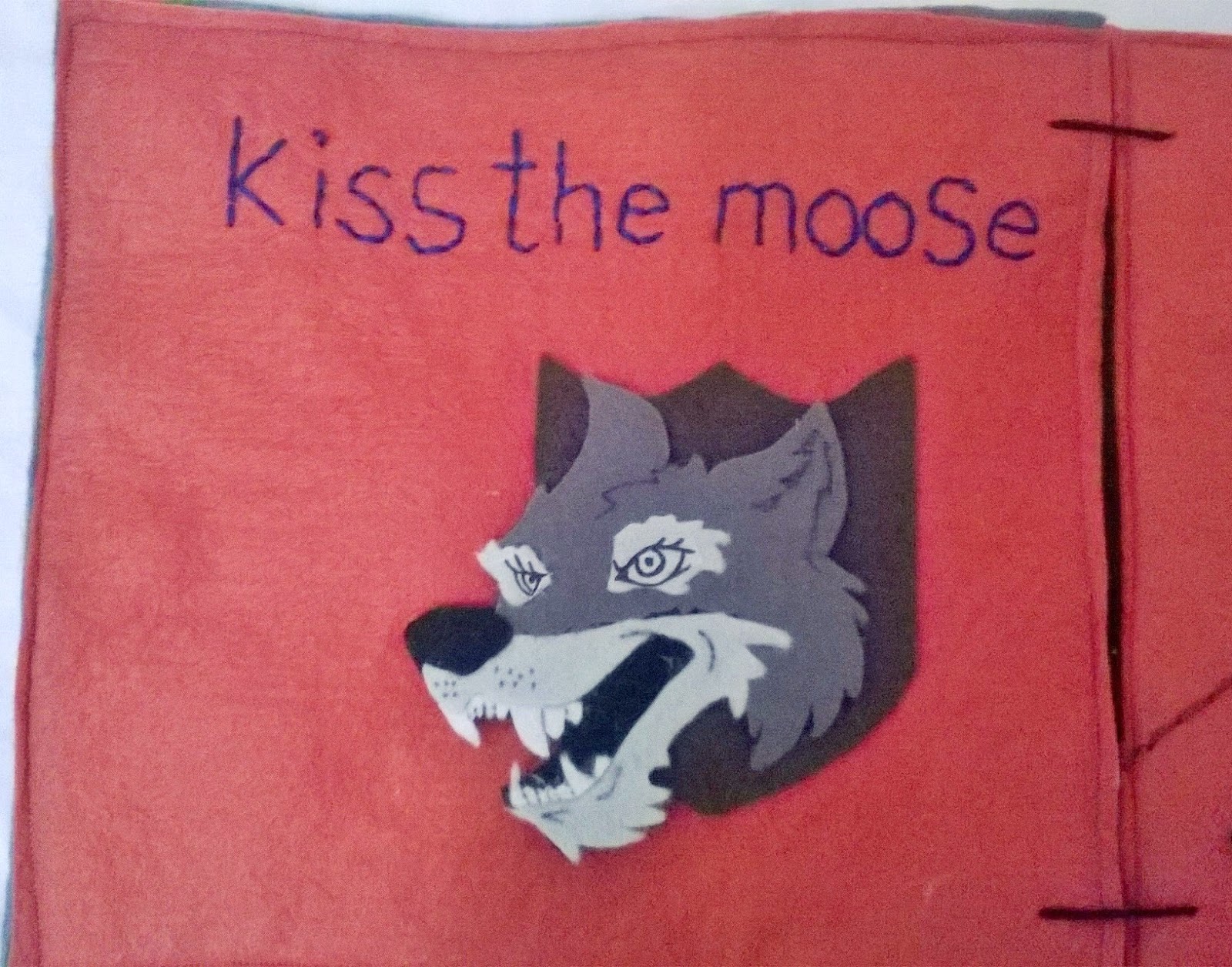 Dude, seriously. Your cousin is into some weird shit. 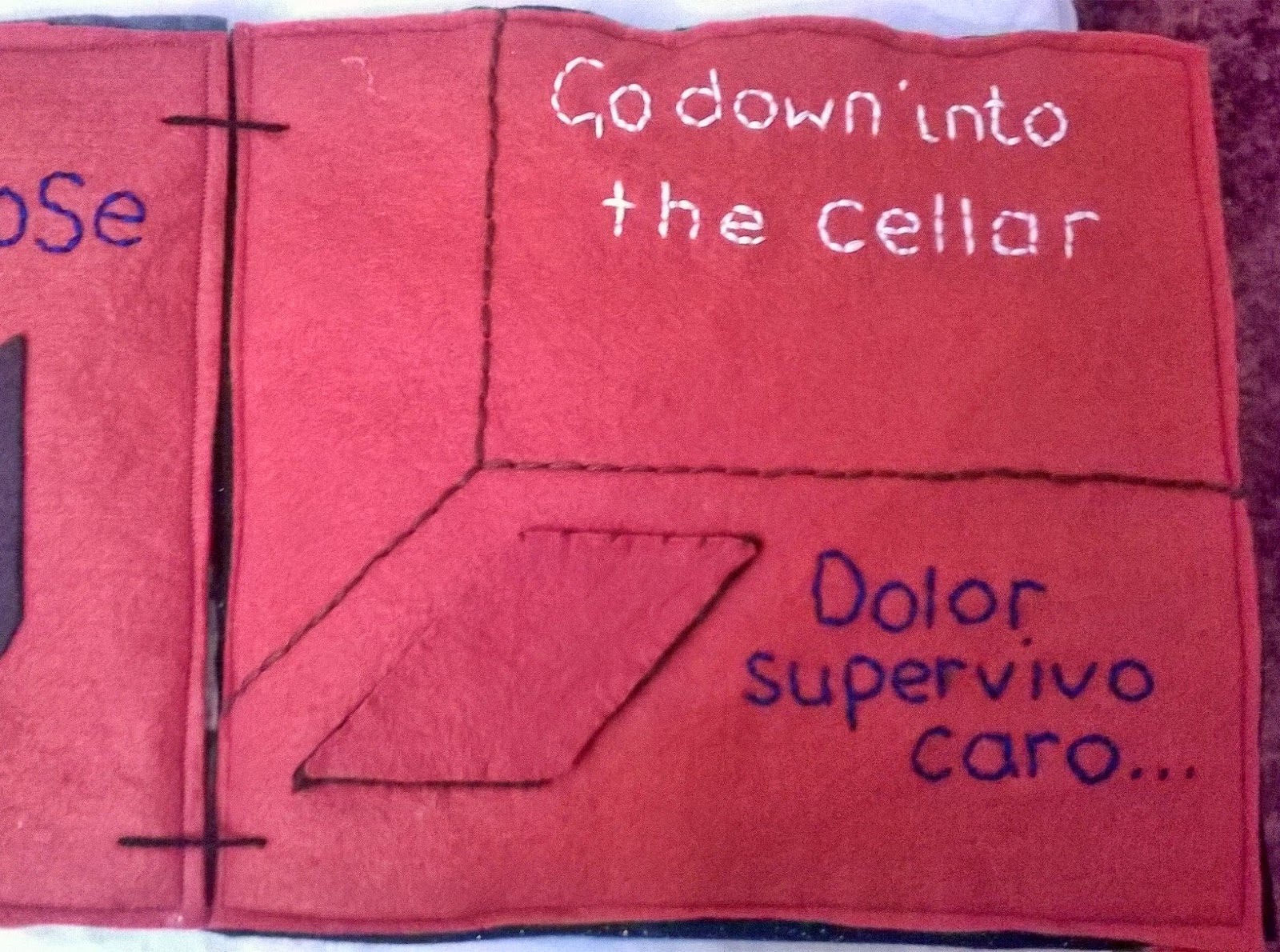 Pages five and six: meet the Buckners.
My good arm is hacked up and ate, so I hope this will be readable. 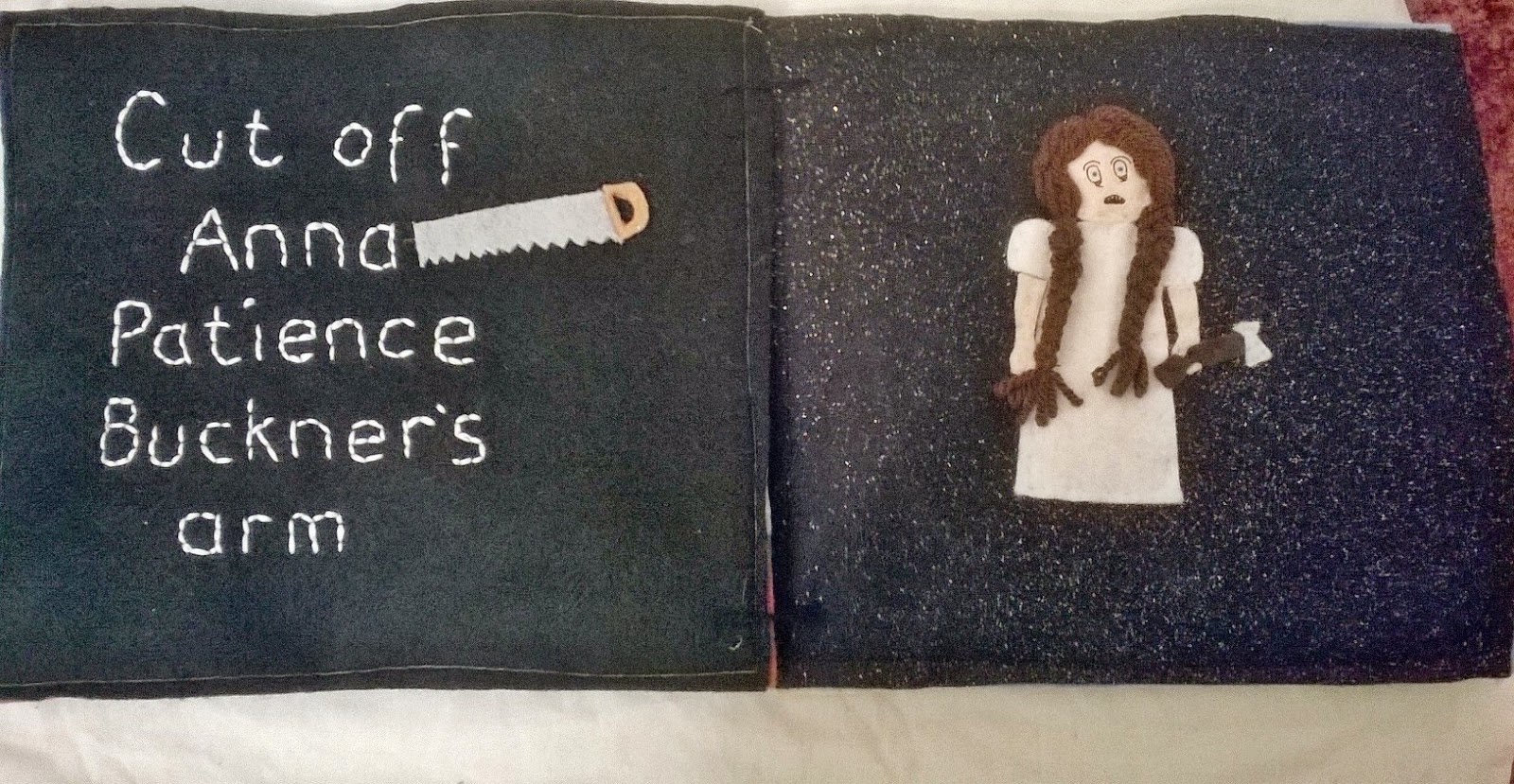 The idea for this book first came to me when I thought wouldn't 'dismember that guy with a trowel' be the best quiet book activity. But I decided not to do that, which still makes me sad. So this is sort of a substitute. 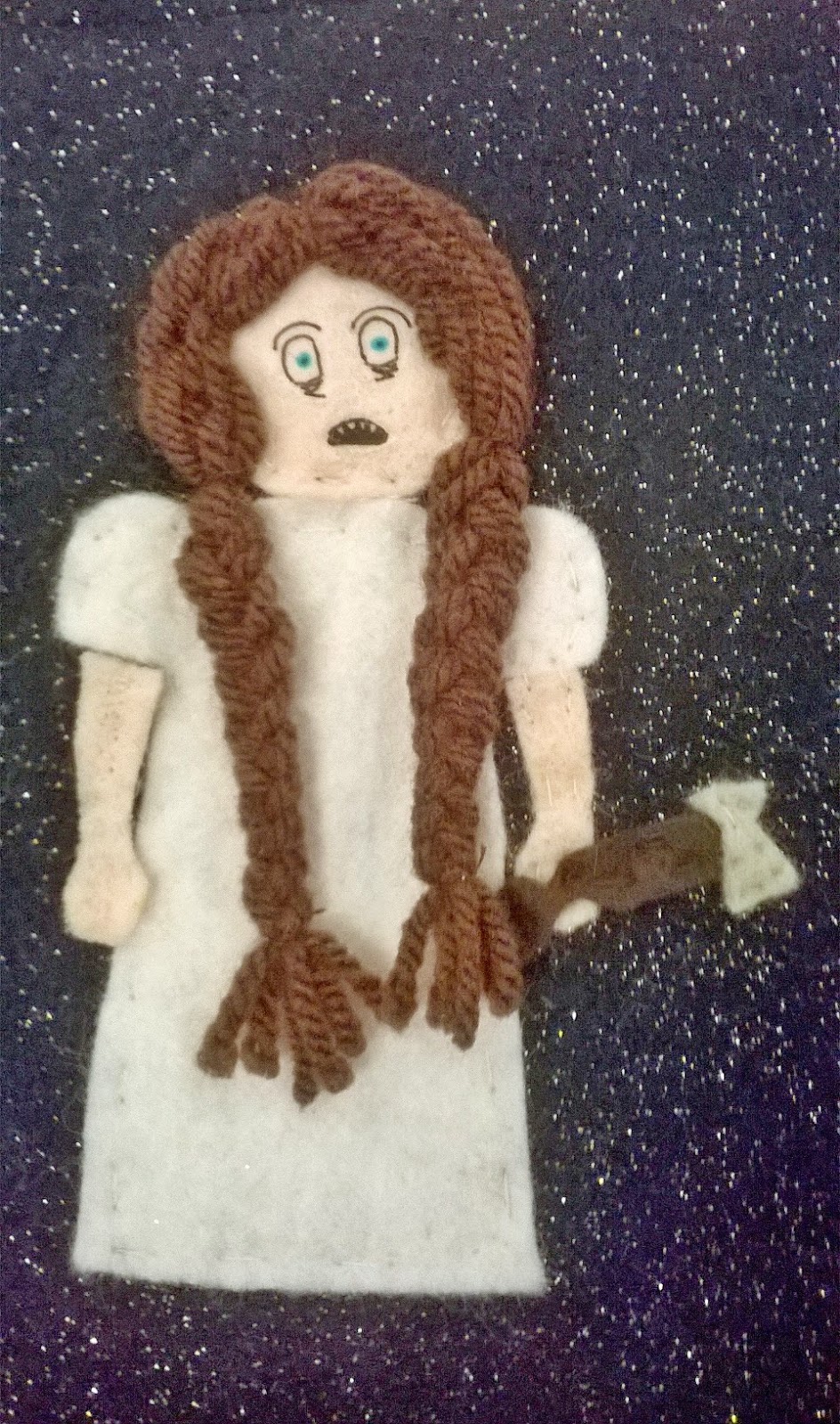 Not easy doing this with only one hand (because I was holding the camera with the other rather than any more sinister reasons.)

Pages seven and eight: meanwhile in Japan.
They're Japanese. What are the gonna do, relax?

The writing, if it isn't clear on this small picure, says Turn Kiko into a HAPPY FROG. 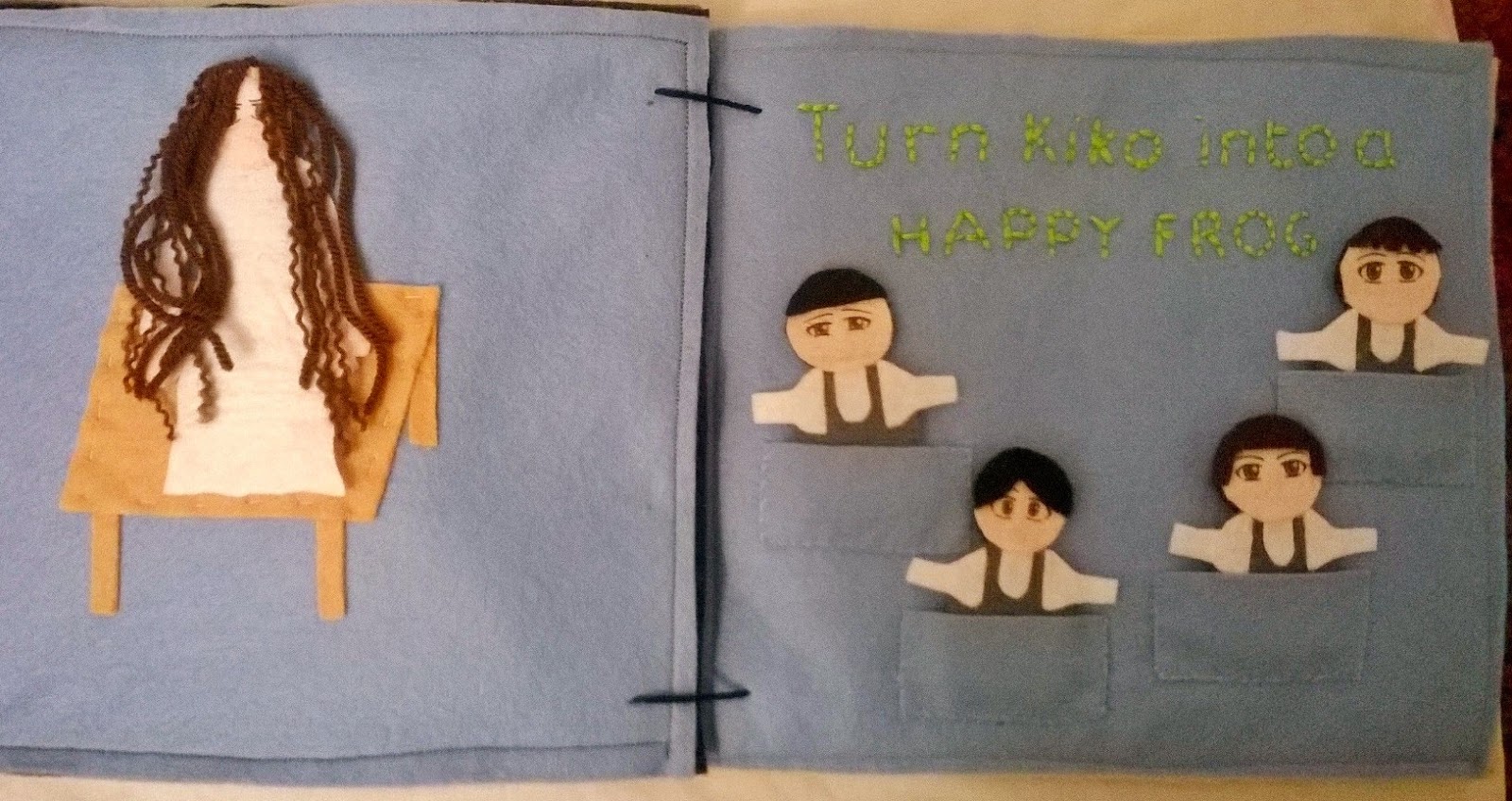 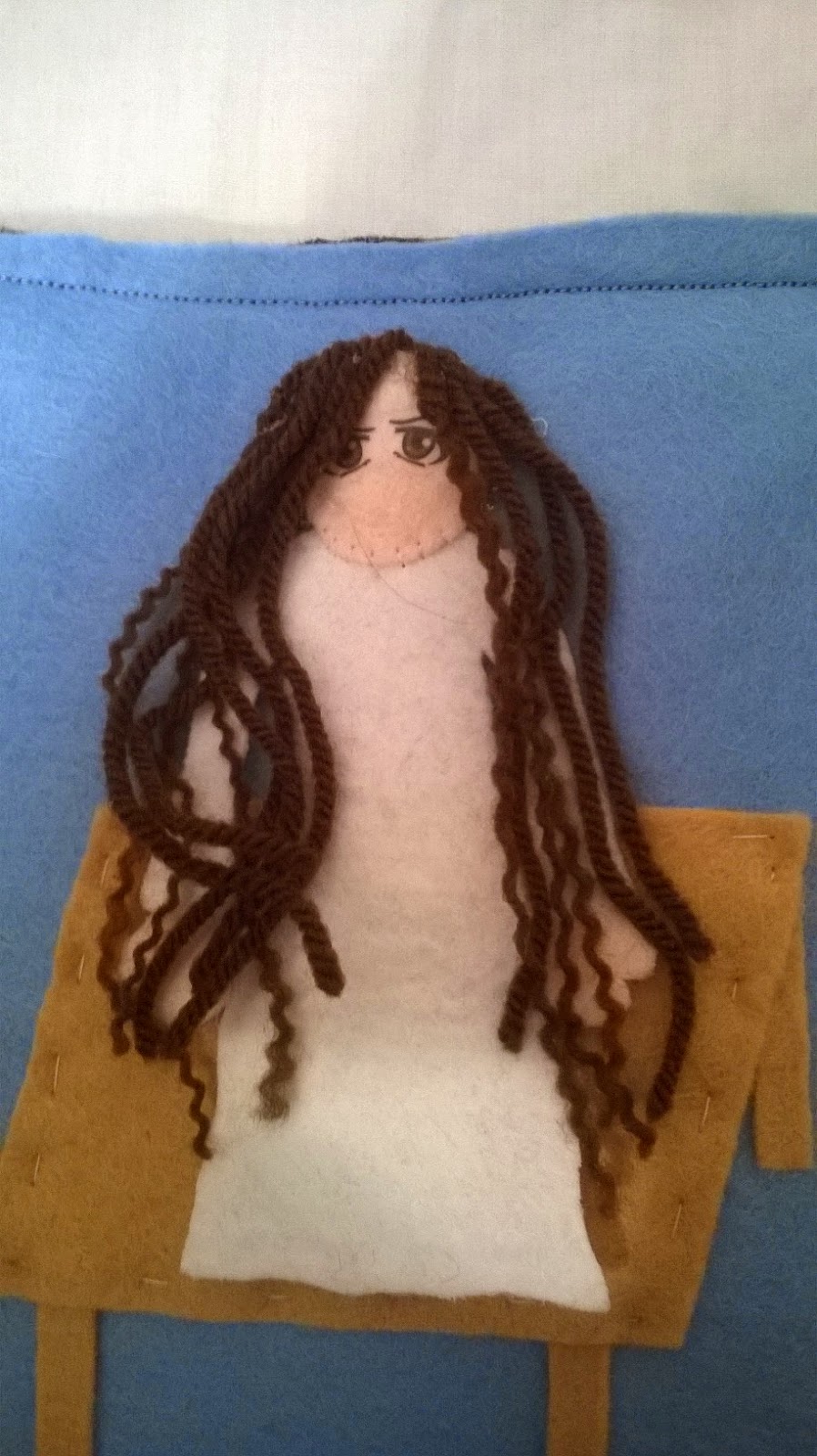 Finger puppets! Little frigging Japanese finger puppet school girls! [imagine a video here where Kiko is turned into a frog and the girls bounce around in happiness. I ran out of hands.] 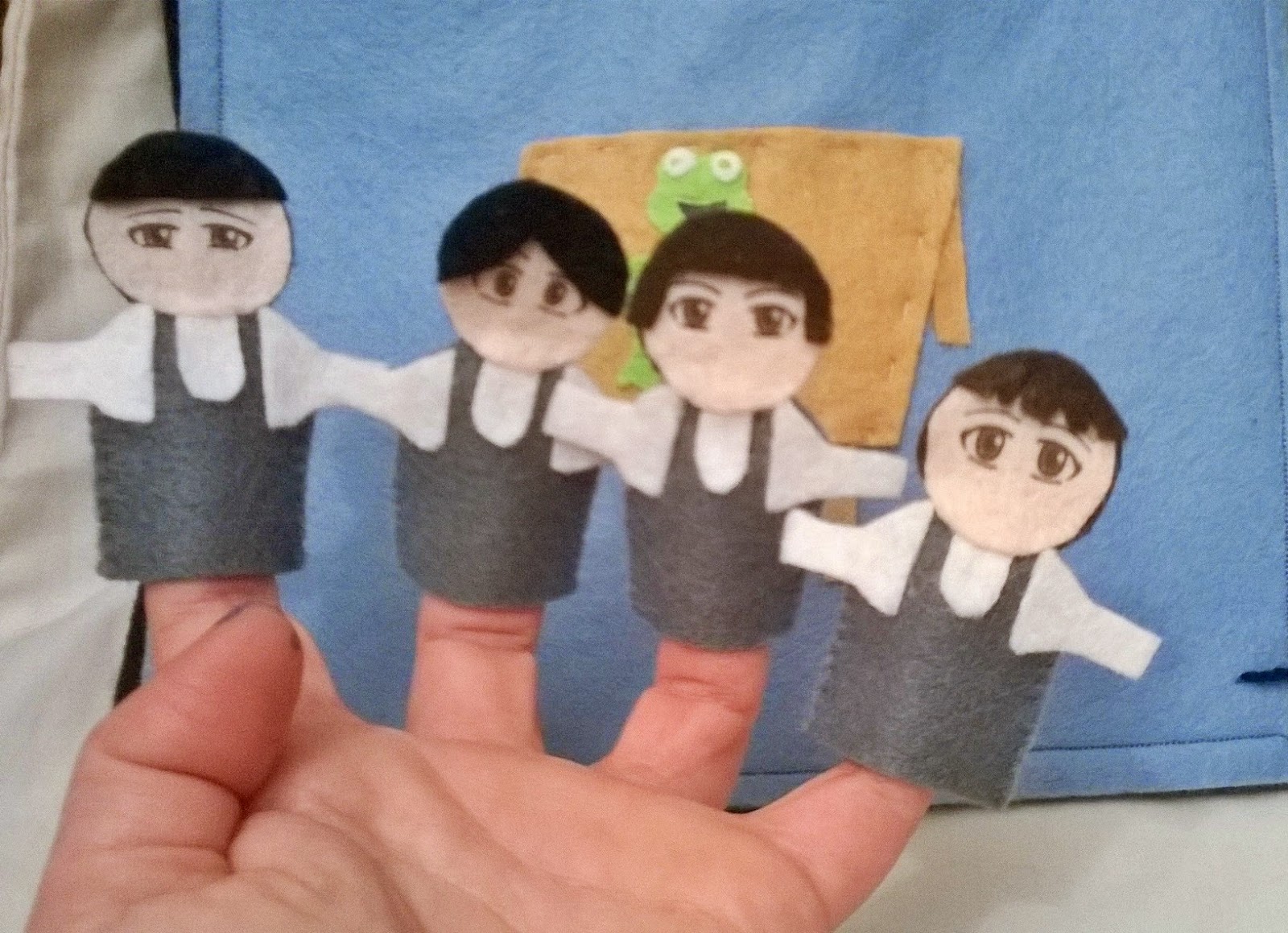 Pages nine and ten: the clean up will be a nightmare.
Let's get this party started 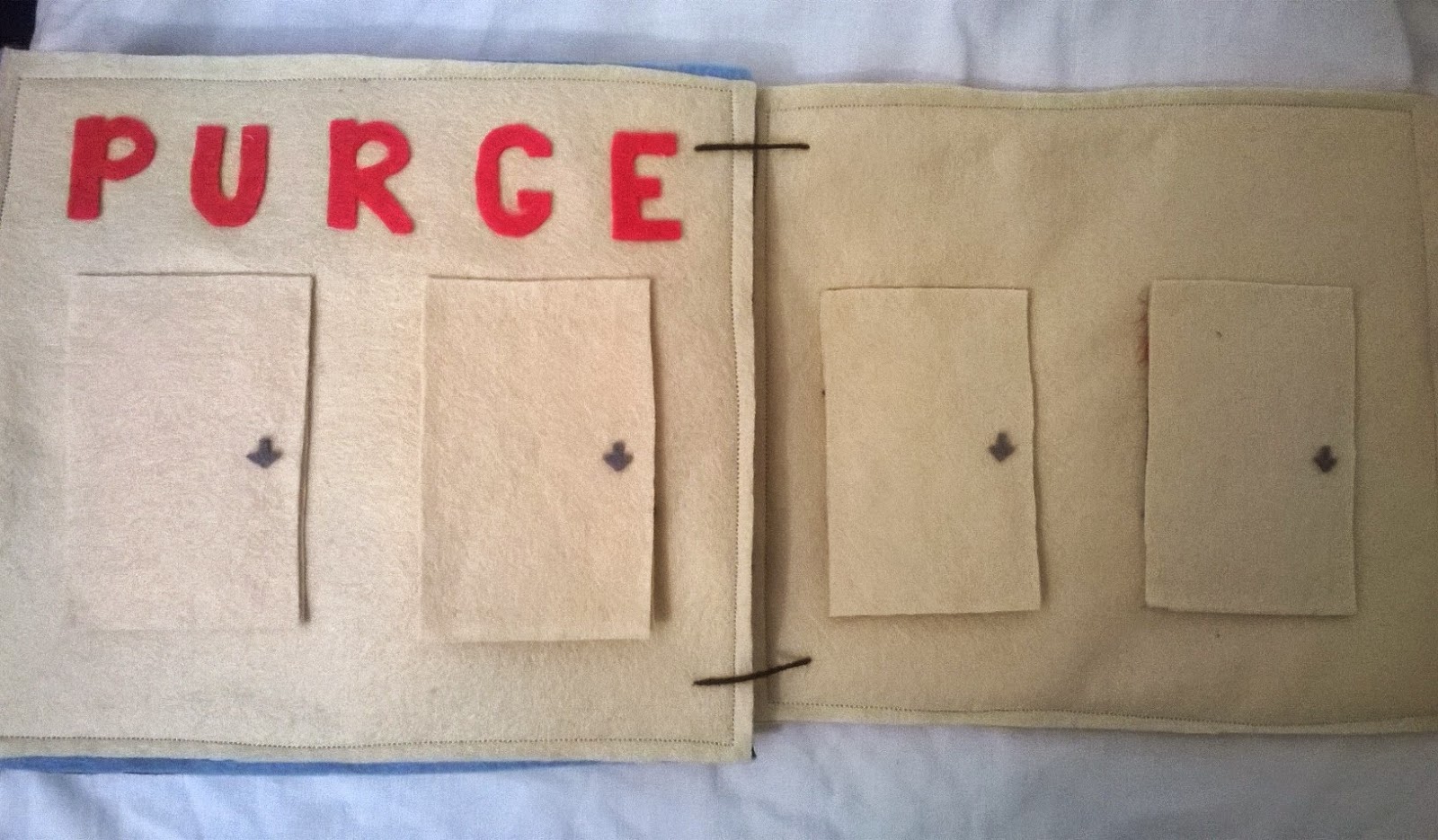 It is clearer in the video, but the elevator doors only have down buttons. Because.. why would you want them to come up?! Which leads me to a question I've been pondering for a while. Why would you even *have* a button that lets all the monsters out in the facility?

I am really not happy with these pages, unfortunately this is where my inability to draw becomes a problem. Usually I just adapt clip art pictures when I need to 'draw' something (but after a couple of hours looking I couldn't find a simple picture of someone impaled by a tree that I could use. Because wouldn't the angry molesting tree look so much scarier having someone hanging from his branches?)
If I were to do this again I would make the whole page generally a lot better and actually show the inside of the elevators, kind of like I did for the merman.Oh well.

Back: Grr aargh.
Wish I could have seen them... 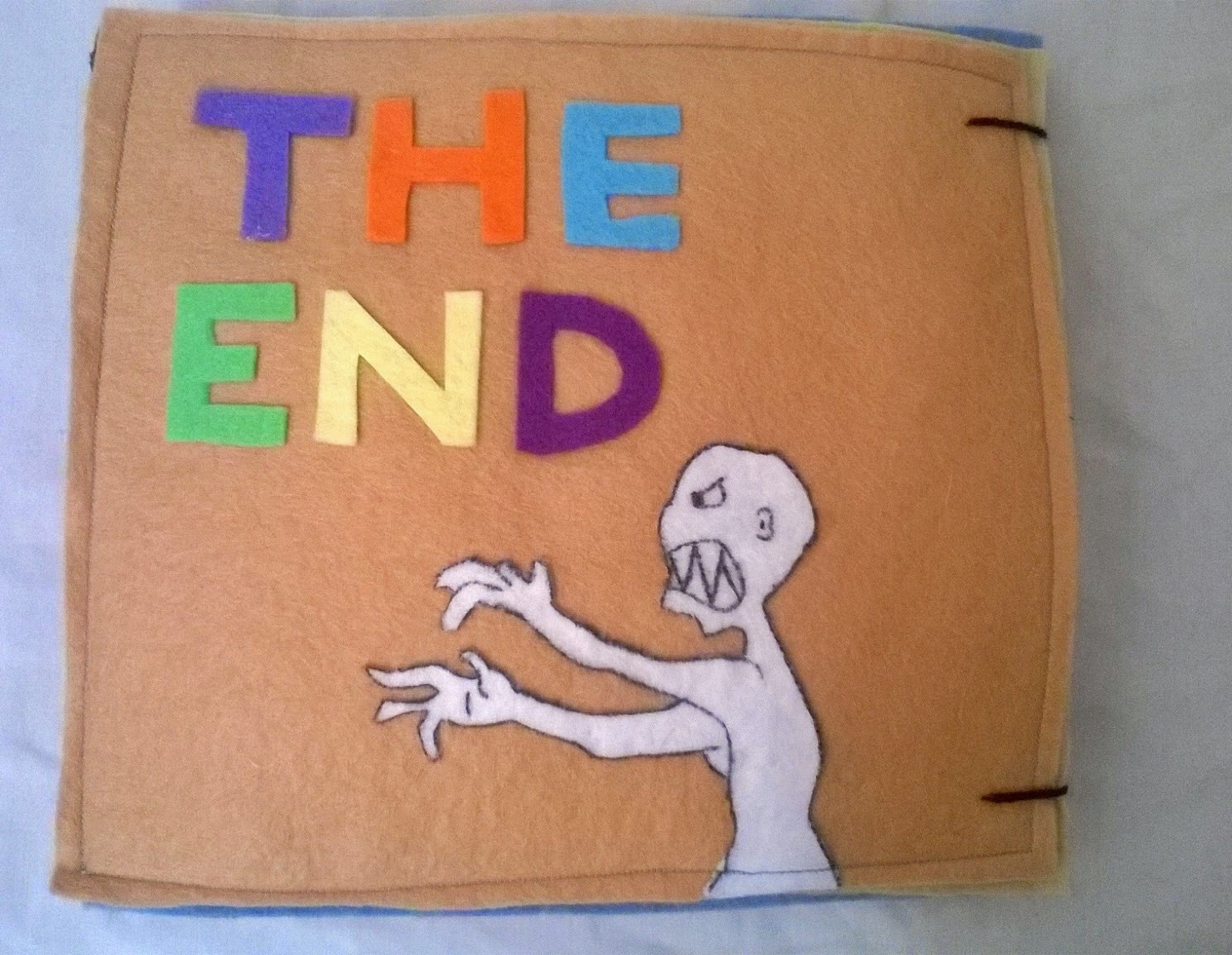 Posted by minipoppy at 2:40 PM